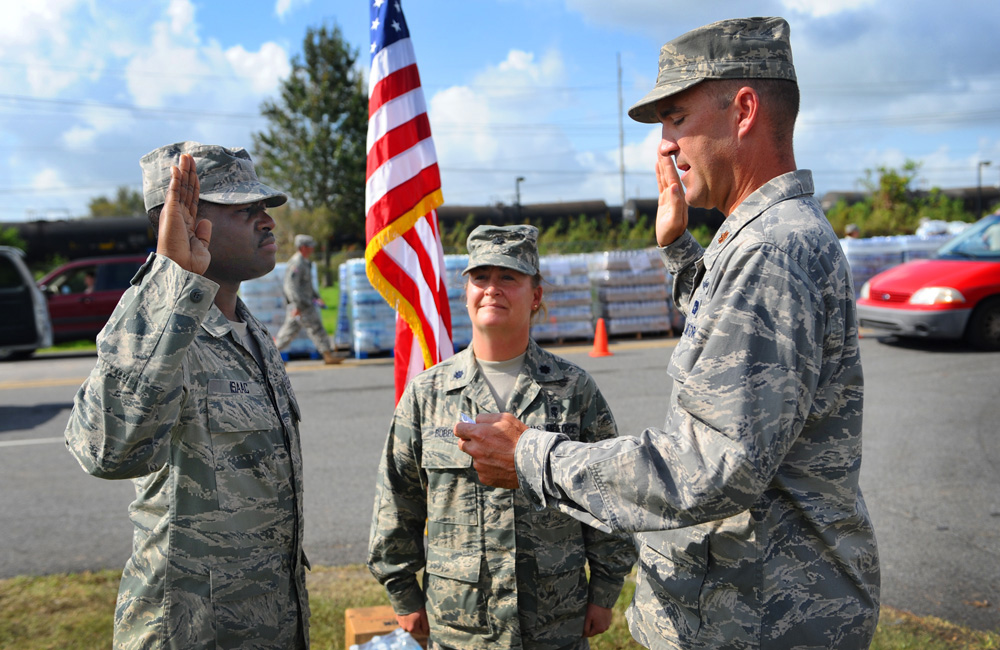 METAIRIE, La. – Emergency response efforts are a commonality for Louisiana National Guardsmen, but while on duty for Hurricane Isaac, an Airman volunteered to re-enlist in order to continue serving the members of his recently impacted community, fellow citizens, his state and country.

“It is an honor to serve my country and my community,” said Isaac, making this Labor Day a memorable one. “Today I am especially reminded of how important our service is to the State of Louisiana,” said Isaac whose home was also affected by the hurricane.

“Staff Sgt. Isaac has been a key player in the accountability and communications from our points-of-distribution locations to our leaders and managers,” said Maj. Todd Hubbell, 214th Engineering Installations Squadron officer in charge, in reference to the Airman’s work while the LANG distributes water, ice and MREs to citizens in need at various locations throughout the state.

“Isaac has frequently volunteered to work in the field in order for his fellow Airmen to have the opportunity to get some rest … he’s an outstanding Airman,” said Hubbell.

“Staff Sgt. Isaac is just awesome,” exclaims Lt. Col. Cindra Bobby, 159th Medical Group clinical nurse. “He’s the first to volunteer for missions, takes time to mentor Airmen and does so with a positive attitude and a smile on his face.” The Lake View, Ark., native said that she was thrilled that Airman Isaac will continue serving in the Louisiana Air National Guard.