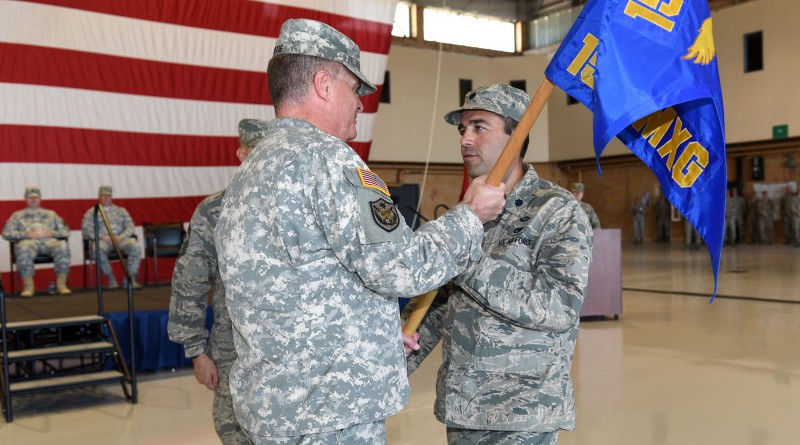 Harlow has been at the 159th Fighter Wing since 2003 and had been the aircraft maintenance squadron (AMXS) commander for five years.

The mission-capable rate has been at an average of 80 percent for the past two years, while the standard is 65 percent, Harlow said. The group flew more hours this year than it did in any of the last 10 years, and set a new record for number of sorties.

Harlow credits these accomplishments to his Airmen, and said he hopes to be able to recognize them in his new role as group commander.

“It’s about the Airmen,” Harlow said. “My getting command is a by-product of how they perform. This is what the group did, not just what I did. It’s because of them that I am in the position.”

Harlow sees it as an honor to be able to stay in maintenance at such a high level of leadership. One of his goals is to give Airmen the recognition they deserved for all their hard work.

“They’ve have my back, so it’s time to return the favor and watch theirs,” Harlow said.

Harlow thanked Col. Roy V. Qualls, deputy director of the LANG joint staff, and Chief Master Sgt. Gerald Raynal, component repair flight superintendent, for advising him and molding him to be the commander he is today.

Harlow said that he leaves the 159th AMXS, in good hands with Mumme as the squadron commander.

Mumme served on active duty for 10 years prior to coming to the 159th Fighter Wing in 2010. The squadron’s accomplishments and hard work motivated Mumme to volunteer for the position. He said his experience in leadership has prepared him to become the AMXS commander, and he looks forward to more interaction with members of the unit.

“One of the things that motivated me to volunteer for the position was the last temporary duty assignment to Red Flag,” an advanced aerial combat training exercise hosted at Nellis Air Force Base, Nev., Mumme said. “We were the best-performing Air Force unit there, and we flew more sorties than was expected of us.”

As the former director of operations for the 122nd Fighter Squadron, he brings a new set of eyes and a fresh perspective to the job.

Mumme said he hopes to learn from everyone, and to provide support from the command level and use the right resources to take care of the unit’s people.