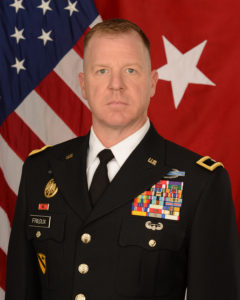 BG Friloux’ s military education includes the Infantry Officer’s Basic and Advanced Courses, Combined Arms Services and Staff School, Command and General Staff College, and the U.S. Army War College.  His holds a Baccalaureate of Science in Psychology from the University of Louisiana at Lafayette in May 1995, a Masters of Arts in Military Studies with a Concentration in Land Warfare from the American Military University in May 2011, and a Masters in Strategic Studies from the U.S. Army War College in July 2016.