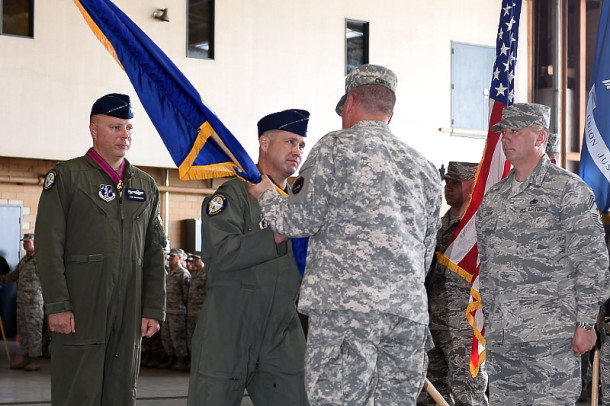 The ceremony included the exchange of the Wing’s colors, which symbolizes the transfer of command authority, accountability and responsibility from one commander to another.

Coco served more than 10 years on active duty before joining the LAANG in 2004. He is a command pilot with over 3,500 flying hours and over 440 combat hours in the F-15 Eagle, AT-38 Talon and MC-12 Liberty. He served in Operations Iraqi Freedom, Enduring Freedom and Operation Crescent Guard following Hurricane Katrina. Additionally, Coco has served as a squadron commander, group commander and as the vice wing commander for the 159th FW.

Coco said that it is a privilege to serve as commander of the Wing and rewarding to be a member of the Louisiana Air National Guard.

“The F-15 is renowned as the #1 fighter jet in history,” Coco said. “But as valuable and impressive as those jets are, they pale in comparison to the Airmen of our Wing.”

After serving for two years as commander, Sostarics has been assigned to LAANG Headquarters as the Director of Operations.

Sostarics was presented the Louisiana Legion of Merit for his exceptional leadership of the 159th’s more than 1,400 Airmen. The Wing has participated in various exercises such as Exercise Cope Tiger in Thailand, which had a 99.1% success rate, and Exercise Juniper Stallion in Israel. Sostarics also had a major role in coordinating patient evacuation with military and civilian agencies in the event of a hurricane or other natural disaster.

“I have been blessed with the best Airmen I have ever worked with. Your devotion to duty, professionalism and excellence is reflected in the work you do; always with a smile on your face,” Sostarics said. “The 159th Fighter Wing has so many great Airmen; it’s been an honor and privilege serving as your commander.”