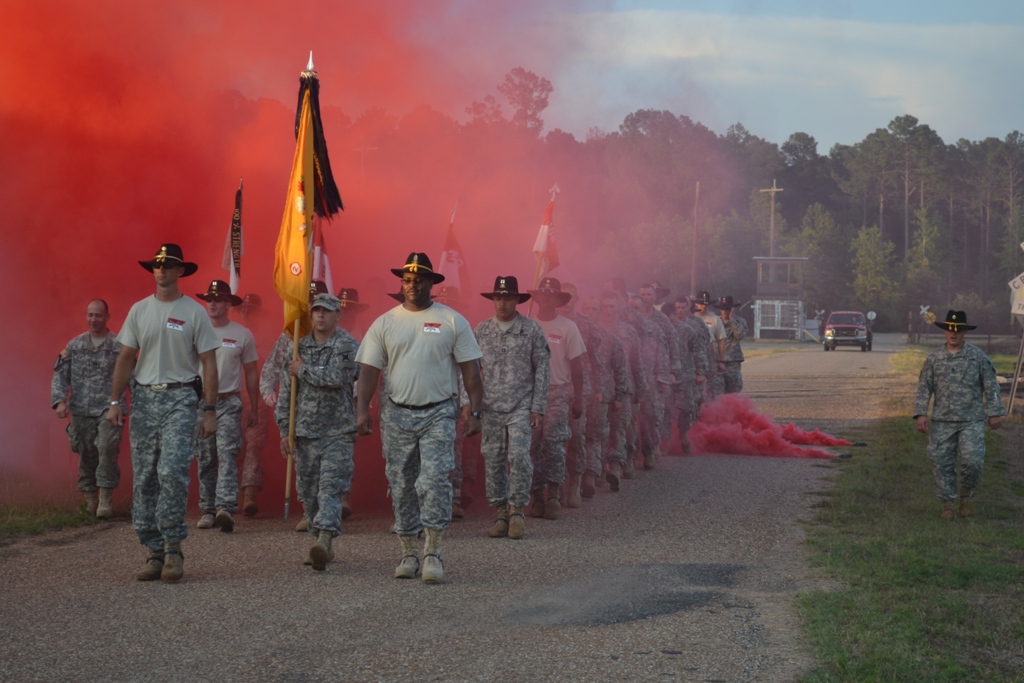 “These Soldiers were tasked with the strenuous duty of navigating to various stations along a 12-mile course by foot, back-packing a rucksack that weighed at least 30 pounds, while simultaneously focusing on missions such as assembling the M2 .50 caliber machine gun and calling in a 9-line medical evacuation,” explained Maj. Jonathan Lloyd, squadron commander.  “These stations consisted of assigned WTTs and battle drills and were evaluated by current spur holders who have already completed the process.”

After the candidates completed the 12-hour “ride,” Lloyd and Command Sgt. Maj. Albert Vanzant, squadron senior enlisted advisor, lead the formation of proud spur holders into Forward Operating Base Geronimo on the grounds of Camp Minden.  As the Troopers marched into the FOB area, they received a roaring welcome from all the Troopers in the squadron.

“As I marched into the FOB, I felt proud for making my unit look good,” expressed Pfc. David Morris of Sterlington, D Company, 2-108th. “It is usually expected that an infantryman or a cavalry scout will finish first. But being a member of a unit that’s mission is forward support, I got to prove that an FSC can lead the way.”

While a sense of pride will be the lasting memory taken from this journey, shortly after the ride, physical pain set in.

“I was in such pain after the spur ride,” said Spc. Tyler Gearlds of Shreveport, B Troop.  “After it was all over, I felt pressure in my legs and primarily my shoulders because of the weight of the ruck sack.  My shoulders hurt so badly just when someone touched them to congratulate me,” he expressed.

“When my back hit my cot, it felt like heaven.  When does a military cot feel like heaven?” the cavalry scout laughed.  “This was great training, and I feel events like this should be added into our training more often.”

That evening, the Troopers were rewarded with a steak dinner served by the spur cadre and given certificates of completion from the command team. The coveted silver spurs will be awarded during the squadron’s annual cavalry ball in September.