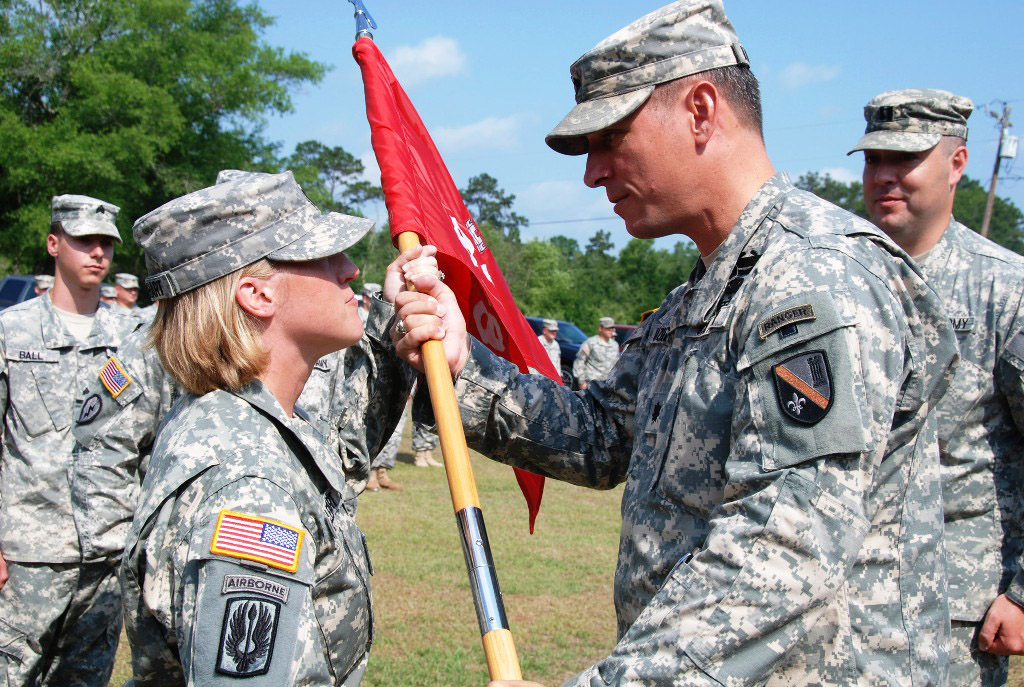 NEW ORLEANS  Command of the Louisiana National Guards 843rd Horizontal Engineer Company switched hands during a change of command ceremony held at the units headquarters in Franklinton, May 22.

Adding another page to military womens history, Englehart becomes the first female commander in the 205th.

Thank you for entrusting me to take command of this great unit, said Englehart of New Orleans. I couldnt be any more excited, and I will work hard for you and expect you to do the same for me.

In his remarks, Lt. Col. Michael Kazmierzak, commander of the 205th, welcomed the new commander to her first command with some words of advice.

I charge you with being an inspiring leader because your Soldiers deserve it, said Kazmierzak. Leadership is what its all about, and you have to demand it from all levels to be a successful commander.

Kazmierzak also presented the Army Commendation Medal to Dunn for exceptional meritorious service while serving as commander of the 843rd since November 2008.

You have led this unit through responding to oil spills, floods and hurricanes, Kazmierzak said to Dunn. To be a great leader, you have to give your Troops the resources and means to do their jobs, and you have done exactly that.

Addressing the unit for the last time, Dunn, a native of Geismer, expressed his gratitude and appreciation to the Troops he has led for the past two and a half years.

Weve been through a lot, and youve always stepped up when I needed you to, said Dunn. Even during the current flood mission, you continue to amaze me, and I thank you for all your support the last couple of years.

The 843rd mission consists of horizontal construction, which includes building roads and airfields for military missions, as well as maintaining equipment and supporting state and federal operations.