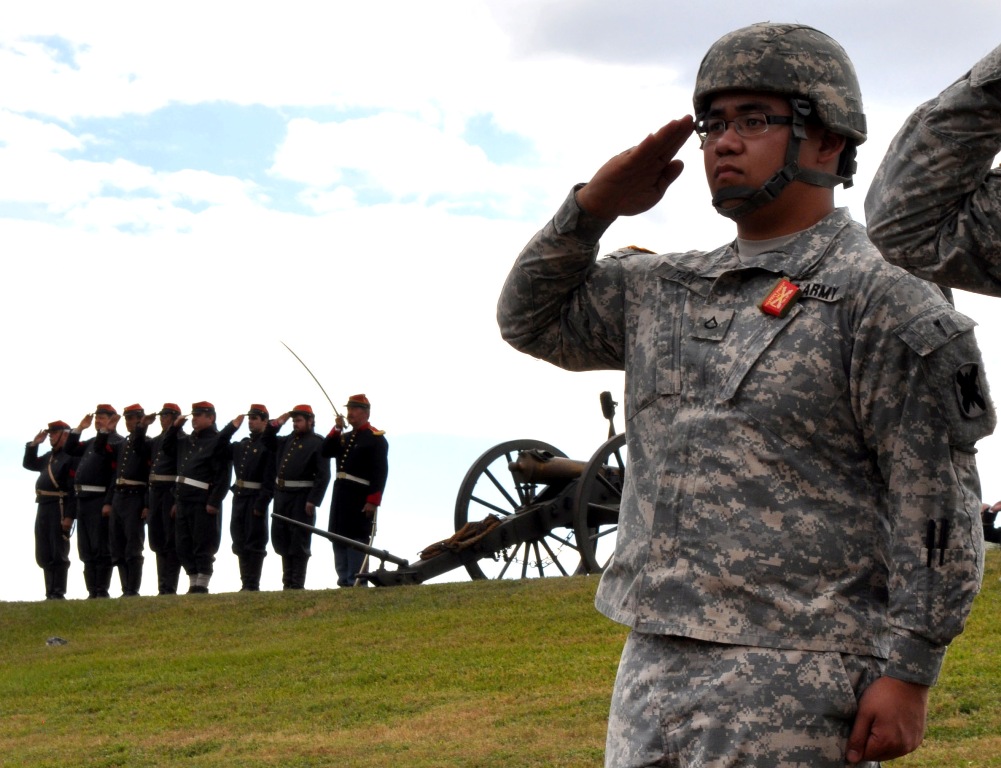 These two longstanding events memorialize the decorated history of the 1-141.

The wreath-laying ceremony, held Saturday, began in 1965 by the Washington Artillery Veterans Association and it honors both the unit’s heritage and its fallen Soldiers.
Standing in front of the Washington Artillery Monument at Lake Lawn, Ronald R. Besson, president of WAVA, spoke to the current Soldiers of the 1-141 and gave them a brief history of what the monument represented.

“The base of the monument lists all of the engagements of the Washington Artillery, including [Operation] Iraqi Freedom,” said Besson. “It also includes the names of all members who have lost their lives in active service.”

The following day, Sunday, Guardsmen of the 1-141 participated in the Pass-In-Review ceremony. The pass-in-review dates from the earliest time in military history and demonstrates the glory and strength of the assembled troops who march in formation before their military leaders.

The LANG’s 156th Army Band began the ceremony by playing the traditional military march, “Semper Fidelis,” as each battery, led by its commander, marched onto the field in unison.

Once the Soldiers were in their places and at attention, Maj. Gen. Glenn H. Curtis, adjutant general of the LANG, Col. Jacques Thibodeaux, commander of the 256th Infantry Brigade Combat Team and Lt. Col. Steven M. Finney, commander of the 1-141, gave due recognition to the formation standing before them.

During the ceremony, A Battery was awarded the “Continuous Fire” streamer for being the best firing battery of the year, while B Battery received the “Try Us” streamer for superior overall unit performance.

Finney took the time to thank the families of his Soldiers and the members of WAVA for their continued support.

“It’s always a great pleasure and a humbling experience for me to stand here with you,” said Finney. “I am very proud to say that I serve alongside you, and you should be very proud of all your accomplishments over the last year.”

Finney also congratulated the battalion for their outstanding performance during disaster relief operations.

“As Hurricane Isaac was rolling through the New Orleans area, you stood tall and met the challenges,” said Finney. “You prepared for all the events prior to the storm’s arrival and once the storm passed you were immediately in the community helping your fellow neighbor with no regard to your own personal property.”

As the ceremony drew to a close, the 156th struck up the tune “Invictus” and the battalion marched past the official party in a final pass.