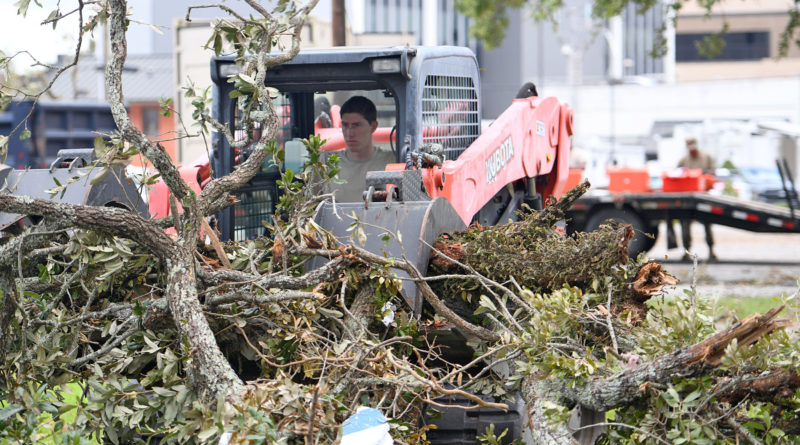 The airmen arrived with debris removal equipment to clear the roadways of the hardest hit areas in and around Calcasieu Parish, La. 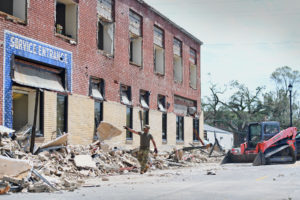 “We have all kinds of random debris clearing tools,” said Master Sgt. Gary Lipkos, heavy equipment non-commissioned officer. “I’ve got 10 personnel with me and seven chainsaws. I have two skid-steers with grapple hook attachments, support lift attachments, some multi-purpose bucket attachments and sweeper attachments capable of clearing debris off of roads.”

Most of their mission tasks have involved removing downed trees, branches and rubble from roadways to allow residents access to their homes to assess damages caused by the devastating category four hurricane. Many homes have structural damage caused by fallen trees and downed power poles, and other homes have completely collapsed.

“Our main task is debris clearance,” said Senior Airman Royal Barnes, heavy equipment journeyman. “We’ve basically just been going to clear the main roads and big debris out of the streets so that people can travel and get to their houses.”

Additionally, the 159 CES team has cleared parking lots of businesses and government agencies for use as the 256th Infantry Brigade Combat Team’s Tactical Operations Center and as a potential civilian command center and/or lodging location for relief crews working in the area. 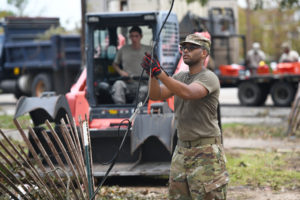 256th,” Lipkos said. “This morning we’re here at the Calcasieu Parish government campus clearing debris away from them so they can set their tent city or their mobile command center out here on their city streets.”

Some airmen have compared the level of damage and destruction in the parish to what they experienced after Hurricane Katrina impacted New Orleans and the surrounding parishes 15 years ago.

“It kind of looks like Katrina because people have trees in front of their houses … or they have trees on top of their houses,” Barnes said. “So, it kind of motivates you, knowing how bad Katrina was, to help the people of Lake Charles.”

Many team members vividly recall Katrina and the aftermath of the storm. Finding a similar situation after Hurricane Laura, these airmen can personally relate to the citizens and communities who now face the task of rebuilding. That motivation has inspired the team to work diligently and expeditiously so residents of the Lake Charles community can return home safely.

“It feels good to be able to help these people,” Barnes said. “I know how it feels to be without your home for a while and be displaced because of a natural disaster.”

“There are a lot of people in need,” said Senior Airman Alejandro Peralta, structural engineering journeyman. “Hopefully they are comforted and feel supported when they see the Louisiana Air National Guard working in the area.”

The LAANG always stands ready and willing to support and assist Louisiana communities during natural disasters.