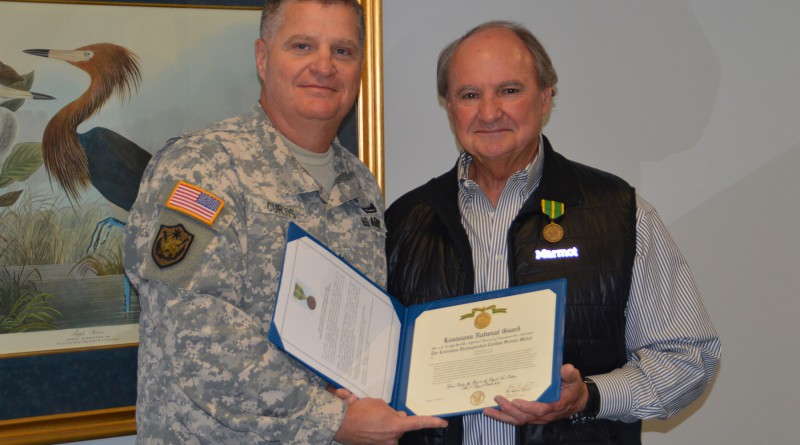 “We wanted to present you with this medal to thank you for what you’ve done for the Louisiana National Guard and Camp Minden, and to thank you for your service in Vietnam as a U.S. Marine,” said Maj. Gen. Glenn H. Curtis, adjutant general of the LANG.

The Louisiana Distinguished Civilian Service Medal is awarded by the adjutant general, upon recommendation, to a civilian who has rendered exceptionally meritorious service in furthering the security and welfare of the State of Louisiana. The performance must be such as to merit recognition for service which is clearly exceptional.

“This is wonderful. But the thanks really goes to you … the all-volunteer military,” said Adley, from District 36 in northwest Louisiana. “In the span of 40 years of office, you look back and ask yourself did I do anything … and from time to time something like this happens and it’s very special.”

The citation reads, “For distinguished civilian service from April 1, 2003 to Dec. 5, 2015 as a member of the Louisiana State Senate. Your tenured service to the Louisiana State Senate and the veterans of Louisiana displayed a commitment to your fellow members and the armed forces. Additionally, your exemplary leadership, support, and assistance facilitated an effective and efficient recommendation to dispose of approximately 15 million pounds of M6 propellant and 320,000 pounds of clean burning igniter at Camp Minden. Your knowledge and vast experience … contributed significantly to committee goals and ultimate consideration of the health and environmental effects to local residents, demonstrating your outstanding character and commitment to your fellow citizens. Your contributions are in keeping with the greatest traditions of civil service and are a credit to yourself, the Louisiana Military Department, the Louisiana State Senate, and the great state of Louisiana.”