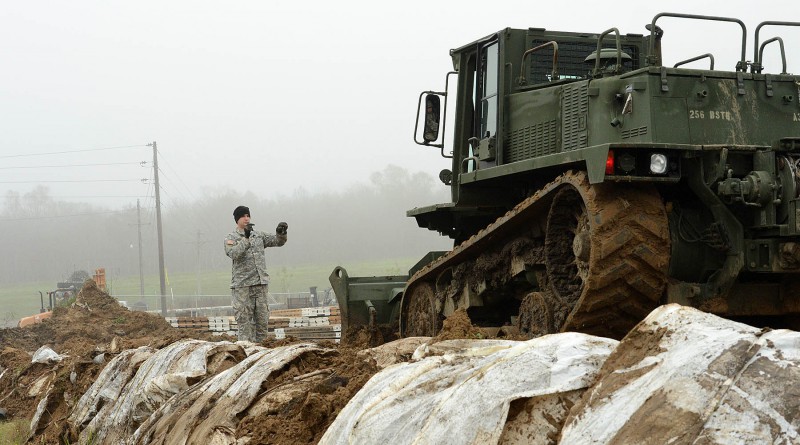 BATON ROUGE, La. – The Louisiana National Guard has now mobilized more than 250 personnel in an effort to build protective barriers against the approaching flood waters and to patrol levees in support of local, parish and state officials at the request of the Governor’s Office of Homeland Security and Emergency Preparedness, Jan. 8.

The 256th Infantry Brigade Combat Team, with the help of the 225th Engineer Brigade’s three bridge erection boats and five-bay package, began transporting 12,550 linear feet of protective levee barriers to Avoca Island in St. Mary Parish early this morning from a staging point in Amelia. The 225th has created a ferry to carry the equipment and materials to the island.

The LANG Mobile Operations Command Center is operating in Morgan City to support the Avoca Island mission. More than 100 Soldiers are conducting 24-hour operations to build the barrier in time.

LANG aviators conducted an aerial survey of the Morganza Spillway Dam and surrounding affected area in support of the Corps of Engineers, Jan. 7. They remain available to conduct further aerial missions as needed.

Guardsmen also began 24-hour levee patrols in the parishes of Concordia, East Carroll, Madison and Tensas in the 5th Levee District to inspect for leaks or seepage.

Two sand-bagging chutes have been provided to state officials in Tensas Parish. The LANG has also issued 13,000 sandbags each to Angola, Avoyelles Parish and West Feliciana Parish.