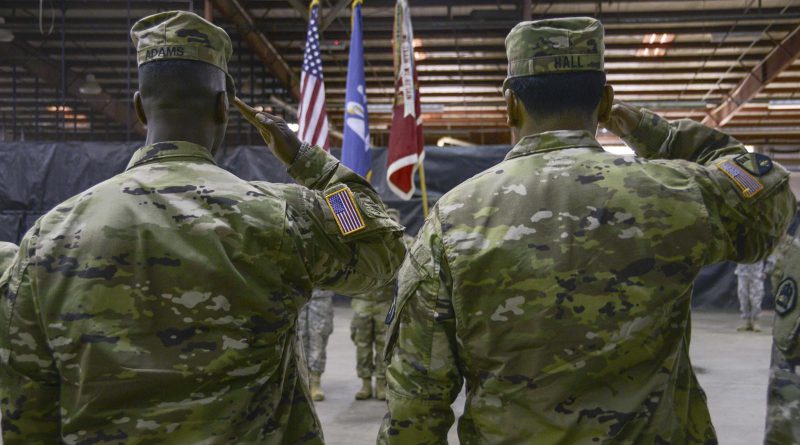 Adams, a native of Little Rock, Arkansas, assumed command from Lt. Col. Willus B. Hall, a native of Dallas, Texas, who served as commander since November 2013 and will be the LANG’s chief of operations. Hall is an agency establishment manager for Allstate Insurance Company full time.

Hall is a veteran of Operation Enduring Freedom and Operation Iraqi Freedom. He served as a battle captain in Afghanistan in 2002, an engineer staff officer in Iraq in 2007 and as brigade officer in charge for Iraqi Partnership Operations in 2009. His military decorations include the Bronze Star Medal for Meritorious Service, Meritorious Service Medal and Army Commendation Medal.

“To the Soldiers of the mighty 527th Engineer Battalion represented by the colors and guidons before me today, you make me swell with pride,” said Hall. “It’s been an extreme honor serving with you [and] to achieve so much over the past three years.”

Hall continued, “Stewart, you are the sterling example of a professional officer and leader. I’ve been awestricken observing you operate and skillfully manage a vast spectrum of critical tasks without failing in any area. I’m comforted in knowing that the 527th is in good hands, and will continue to thrive as a premier engineer unit in our nation.”

As the units of the 527th looked on, Maj. Gen. Glenn H. Curtis, the adjutant general of the Louisiana National Guard, received the organizational colors from Hall and passed them to Adams, signifying the transfer of leadership over the unit.

Hall was presented with the Meritorious Service Medal for his exceptional leadership while serving as the commander of the 527th over the last three years.

Curtis commended Hall on doing a great job and his successful time as commander said before congratulating Stewart on taking over command.

“Stewart, congratulations, you’ve earned the right to command,” said Curtis to Adams. “It’s not just something that is given.  You’ve always been a cut above in your peer group, and so you’re rewarded with the opportunity to lead these fine Soldiers and fine Americans.”

Adams received his commission from the LANG’s Officer Candidate School in 2001. He holds a Bachelor of Science in Computer Information Systems and Masters of Business Administration with a concentration in Management from Louisiana Tech University. His military education includes Engineer Officer Basic Course, Engineer Captain’s Career Course, the Adjutant General’s Course, Command and General Staff Officer Course and the Advance Operations Course.

Adams’ awards include the Bronze Star Medal, the Meritorious Service Medal, the Army Commendation Medal and the Army Achievement Medal. “It is truly a blessing, and I am elated to take the reins of this battalion. I have spent most of my military career with the 527th and I realize that it is rare to assume command of a battalion that you grew up in, so I am honored to be given this opportunity,” said Adams. “This battalion has a long upstanding tradition of excellence, and I hope to continue that for as long as I am here.”