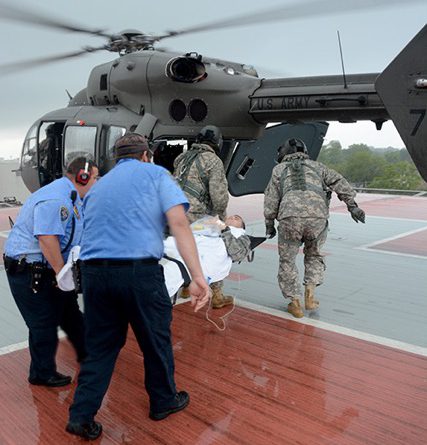 NEW ORLEANS – The Louisiana National Guard hosted Vigilant Guard 2016, a federally funded exercise to prepare for all-hazards response and emergency operations, April 11-16. The exercise scenario tested the LANG’s response to a simulated Category 3 hurricane that made landfall on the Louisiana coast.

“Vigilant Guard 2016 has been about stressing our systems and processes so that we can identify any gaps, analyze them, and improve our response capabilities,” said Maj. Gen. Glenn H. Curtis, adjutant general of the Louisiana National Guard. “We want to make sure that we are as prepared as we can possibly be, that we have thought of as many potential obstacles as possible and worked through them now when lives aren’t on the line.”

The Louisiana Governor’s Office of Homeland Security and Emergency Preparedness held a statewide exercise in conjunction with Vigilant Guard, which included the Louisiana Department of Health and Hospitals, Louisiana State Police, Red Cross and more.

“Hopefully we’re preparing for something we never have to do, but we have to prepare anyway because we know in Louisiana it’s not if, it’s just a matter of time when that next hurricane is going to come knocking,” said Gov. John Bel Edwards.

Vigilant Guard is an annual training event supported by the National Guard Bureau and sponsored by the United States Northern Command, whose mission is to provide homeland defense, civil support and security cooperation to defend and secure the United States and its interests.

“This is the closest to real I could imagine,” said Sgt. 1st Class Anthony Rome, a combat engineer with the 926th Mobility Augmentation Company who supervised a decontamination team during the exercise. “My guys are getting some great training with the other Guard units here, and the hands-on training gives us more experience than just learning out of a textbook should something happen.”

At East Jefferson General Hospital in Metairie, Guardsmen practiced evacuating hospital patients via helicopter, which could be necessary due to loss of electricity or equipment failure during a catastrophic storm.

“Our goal is to take excellent care of our patients and move them to safety in a disaster type situation, and the only way we can do that is by working with the National Guard and their resources to move them to a safe location,” said Michael Guillot, director of Emergency Medical Services at EJGH. “We certainly depend on the National Guard and the Armed Forces for back up and support.”

At the Naval Air Station Joint Reserve Base New Orleans in Belle Chasse, more than 270 role players acting as patients from EJGH and five other area hospitals were processed to test the post-storm aeromedical evacuation exercise by the LANG’s 159th Medical Group, West Virginia’s 167th Airlift Wing, and Oklahoma’s 137th Special Operations Wing. Patients continued to receive medical care while they were loaded onto a C-17 Globemaster III to be transported to hospitals outside the threat zone.

At Camp Beauregard in Pineville, the Joint Operations Center was activated to test the LANG’s command and control capabilities.

At Camp Minden, the 199th Leadership Regiment established a Joint Reception, Staging, Onward Movement and Integration center to conduct training to in-process units that would arrive in Louisiana if assistance was requested as part of the Emergency Management Assistance Compact, a state-to-state mutual aid agreement that enables states to share resources during emergencies.

“The goal is about having the plan in place, rehearsing it and then if it happens, we’re not surprised and we’re ready,” said Lt. Col. Henry T. Cappello, information operations and cyber planner for the Louisiana National Guard. “We’re not waiting until after an incident to get involved, we’re getting involved now.”