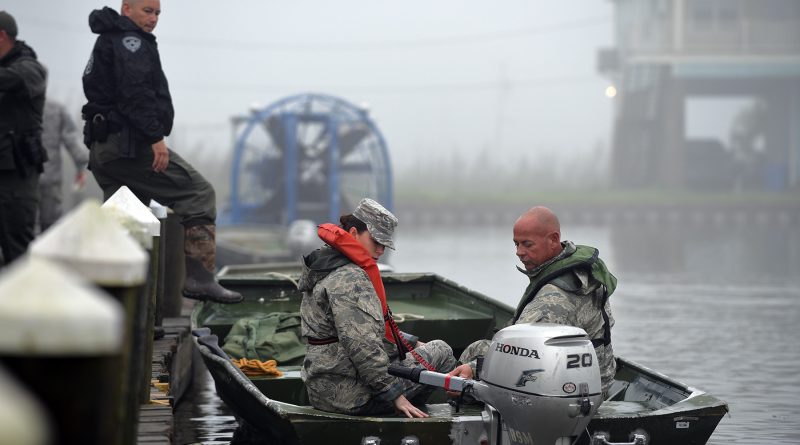 NEW ORLEANS — The Louisiana National Guard and the Governor’s Office of Homeland Security and Emergency Preparedness coordinated with 48 federal, state and local partners from around the state in an annual disaster response exercise designed to test and reinforce the capabilities and cohesive action between various government and non-governmental agencies, April 5-7. 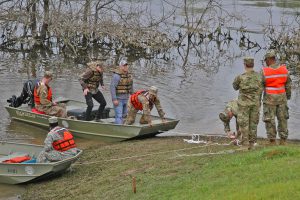 The exercise, organized and coordinated by the LANG and GOHSEP, involved field training missions which occurred simultaneously in Natchitoches, Port Sulphur and Sterlington with 912 military and civilian personnel to reinforce readiness before hurricane season.

Maj. Gen. Glenn H. Curtis, adjutant general of the LANG, emphasized the importance of these training exercises.
“What we really want to do is drive our systems to the point where they actually break so we can understand where our gaps are and refine our processes,” said Curtis.

At the Natchitoches location, Guardsmen with the 256th Infantry Brigade Combat Team, headquartered in Lafayette, practiced boat and land search and rescue operations along with parish, state and federal agencies. Guardsmen and their partners conducted “lily pad” operations, which are consolidation points where people are brought once rescued to receive medical support, security, pet processing and transportation out of devastated areas. Intercommunication capabilities were also tested in coordination with other agencies.

“Just like you’d want a battle-hardened soldier in a fight, you want someone who has experience in 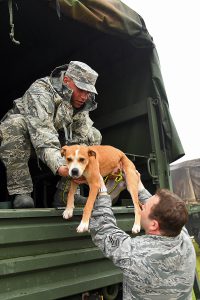 fighting off disasters and rescuing people,” said Louisiana Governor John Bel Edwards. “Louisiana has been through a lot of natural disasters, and we have a lot of experience when it comes to responding to them. We are the best in the country in disaster response.”

Caesar Velasquez, the mayor of Sterlington, closely monitored the exercises with state and local officials.

“This has been a tremendous exercise that is going to develop and drive interagency cooperation, which is very important,” said Velasquez. “It gives our people the preparedness they need going forward.” 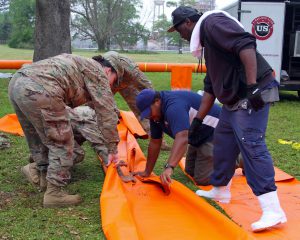 “A lot of us have worked together before in both training events and real situations within Plaquemines and St. Bernard parishes,” said Col. Matthew Rippen, commander of the 159th. “The cooperation is tremendous and the relationships that we’ve built on has been wonderful. We’re ready and willing to help whenever we’re called upon.”

These types of joint exercises provide the LANG as well as state and local officials with the opportunity to build relationships with the people they will be working with during real-world storms and disasters.