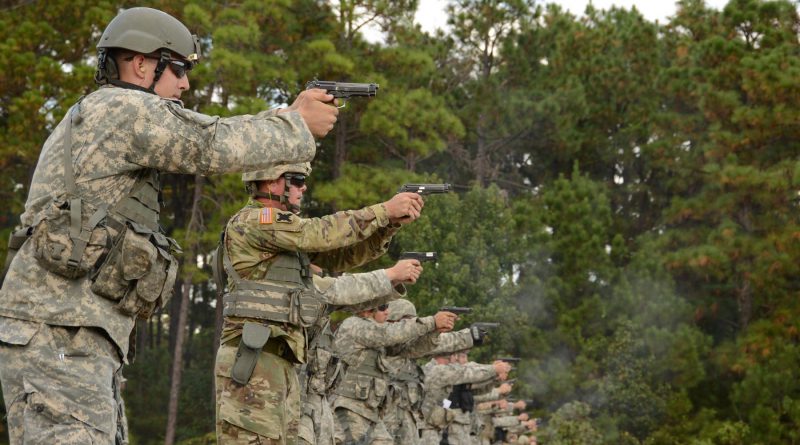 PINEVILLE, La. – The Louisiana National Guard’s state marksmanship program had 74 Soldiers and Airmen from around the state compete in the annual Adjutant General’s Marksmanship Match with hopes of making the Governor’s Twenty, at Camp Beauregard in Pineville, Oct. 13-14.

1st Sgt. Tommy McGee of Columbia, and 1st Sgt. Johnathan Chapman, of Farmerville, modeled the competition after the national and international level matches they have competed in. These matches challenged the Soldiers and Airmen’s rifle and pistol skills in areas such as precision shooting and reflexive fire.

“Our main mission is to teach the lowest ranking Soldier marksmanship skills and help them improve. Hopefully, by doing that, it will [help] retention throughout the state of Louisiana,” said Chapman.

According to the event’s organizers, the matches were designed to improve combat readiness and survivability by exposing shooters to stressful situations. Each team was made up of two veteran shooters and two new shooters to train new marksmen.

“The marksmanship unit for the state does an excellent job of trying to change the matches to mimic what’s being done at the national level. The goal here being not only to improve the Adjutant General’s Marksmanship Program, but also to try to select the best candidates to go and compete at the regional and national level,” said Maj. William Saint, commander of the 62nd Weapons of Mass Destruction Civil Support Teams and a third year competitor at the TAG match.

Chapman and his team implemented mandatory briefings and a match bulletin this year to make sure shooters knew what to expect at the match the following day.

“I’ve worked with Chapman on SRT for years, and it’s wonderful to see him take over for 1st Sgt. Tommy McGee. They’re both phenomenal shooters,” said Staff Sgt. Nicole Bourgeois with the 199th Regiment (Regional Training Institute). “It’s just great seeing everybody together; you’ve got a really good mixture of seasoned shooters and new shooters, such as myself. It’s great to watch it all come together, great firing time, great practice and great for comradery.”

“It’s a big honor to take over, and I’m just trying to fill in some big shoes that he left behind,” said Chapman.

Chapman’s future plans for the program including using the team as coaches during the best warrior competition to help improve marksmanship skills.

“I would like for us to be able to go around to different units and put on different clinics to help the units get ready to re-qualify,” said Chapman.

During the awards ceremony, Chapman presented McGee with a new .45-caliber Springfield 1911 pistol as a thank you for everything he did for the program and

for the leadership he provided over the years to countless competitors.