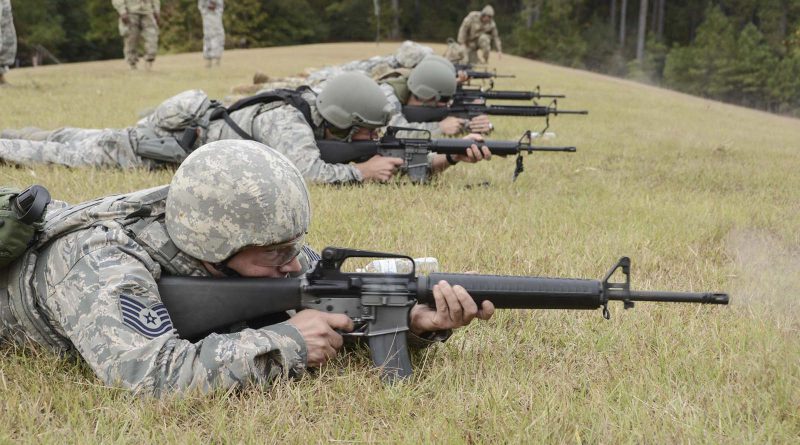 PINEVILLE, La. – The Louisiana National Guard’s top marksmen from around the state gathered at Camp Beauregard in Pineville for the annual Adjutant General’s Match, Oct. 19-20.

The 72 Soldiers and Airmen that competed in the match had the opportunity to put their skills and training to the test, with top shooters earning a spot on the Governor’s 20. Each team consisted of four shooters: two veteran and two first-year competitors.

“We have two old and two new because that’s what they do at the national level,” said 1st Sgt. Jonathan Chapman, a Farmerville native and the state marksmanship coordinator. “The reason for this is we always want to push marksmanship and bring new shooters to the program. We try to build a group of people that will hopefully pass their knowledge down to the lowest ranking Soldiers at their unit.”

Chapman said he models the competition after the national and international level competitions Soldiers can compete in. The matches were designed to improve combat readiness by exposing shooters to stressful shooting situations.

The competition challenged the shooters rifle and pistol skills in areas such as precision shooting and reflexive fire. Soldiers and Airmen not only test their skills, but they get to learn and train with the veteran competitors.

“I’ve never shot 300 meters with iron sites and it was a fun challenge. I realized I could do more than I thought I was capable of,” said Airman 1st Class Julia Thomas, a Metairie native with the 159th Fighter Wing. “I do a lot of fidgeting when I’m in the prone, but I had somebody standing over me who taught me how to manage and shift my gear and where to place my rifle to make it all work.” Thomas wasn’t the only one who found support from other competitors. TAG Match veteran Sgt. Andy Gonzalez, a Marrero native with the 62nd Civil Support Team, also talked about how camaraderie between competitors helped every marksmen to improve.

“I love shooting and the big thing is I get to come out here and see familiar faces that I don’t get to see on a regular day,” said Gonzalez. “It feels good looking at different teams and seeing the veteran shooters helping new shooters. We all just come out here to have fun; yes it’s competitive, but at the end of the day we are just here to have fun.”

In addition to the top twenty competitors being awarded a Governor’s 20 tab, the top 10 percent earn a bronze Excellence in Competition badge. These shooters can then compete at regional and national levels to earn points towards the gold EIC badge, which is the highest military marksmanship designation.

At the end of the competition the Soldiers and Airmen attended a dinner to hand out awards to the top shooters and the top team. This year Army Sgt. 1st Class Michael Clark, a Greenwell Springs native, was named Top Gun with the highest overall combined score. Clark also had the highest scores in the EIC Pistol match, the Anti-Body Armor match and highest individual score in the Individual Pistol match.

Army Sgt. Jonathan Wood, a Kenner native, had the highest overall score in the Individual Rifle and