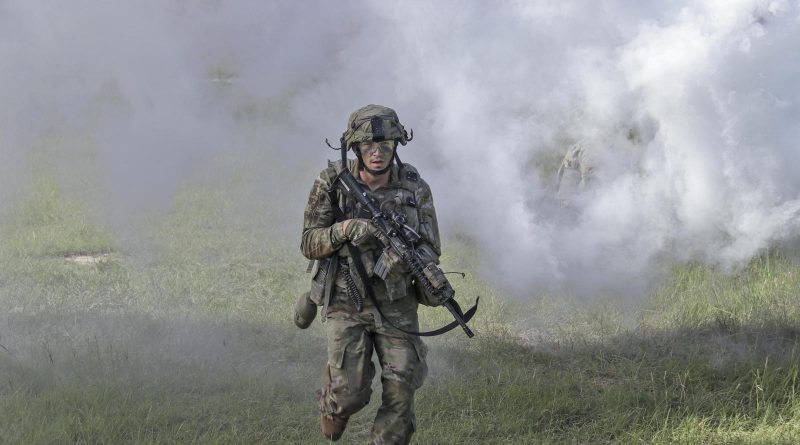 PINEVILLE, La. – The Louisiana National Guard’s 256th Infantry Brigade Combat Team had over 3,400 Soldiers participate in a rotation at the U.S. Army’s Joint Readiness Training Center at Fort Polk in Leesville during their annual training, May 30 – June 28.

“The goal of JRTC is to train brigades to fight as a team. This collective training begins at the squad level and builds by echelons until reaching the brigade level,” said Lt. Col. Cameron Magee, 256th IBCT executive officer. “JRTC allows us to identify our shortfalls and weaknesses in our systems and processes so that we can adjust our deficiencies here rather than in a combat situation.”

The 256th and other participating units were evaluated by active duty Soldiers from the JRTC Operations Group, Brigade Mission Command Task Force at Fort Polk, who observe, coach and train units that participate in the exercise.

“The Tiger Brigade, like all Army brigades, consists of a core formation which includes infantry, cavalry, artillery and engineers,” said Magee. “Our enabler forces bring anything from special forces to additional transportation assets, which improves our capabilities as a brigade.” During the two-week training exercise, the 256th was tasked to tactically move and liberate towns from an opposing force in the area. The opposing force was played by active-duty Soldiers from 1st Battalion, 509th Infantry Regiment, who are stationed at Fort Polk.

Guardsmen were trained and tested in every operational capacity they have, from ensuring proficiency with each weapons system to moving quietly and tactically at night.

“This training lets us test our standard operating procedures and strategies and numbers we have on paper in a real life setting,” said Command Sgt. Maj. Patrick Sandel, senior enlisted advisor for the 256th IBCT. “Our Soldiers are given the opportunity to evaluate and lead their personnel on individual or collective tasks they are assigned.”

In addition to go giving the brigade a chance to practice their tactics in a large scale force-on-force exercise, the month-long training opportunity gives individual Guardsmen more hands-on time to teach or learn more about their military job, which they may not have time to practice outside of their monthly drill weekend.

“The Soldiers enjoy doing their job, and when things get tough, they have their first line leaders there for support,” said Sandel. “A huge benefit of training exercises like this is battlefield circulation and building camaraderie within the units so they can work better as a team.”

Spc. Lane Bergeron, an information technology specialist in Headquarters and Headquarters Company, 256th IBCT, from Church Point, was awarded the title of “Hero of the Battlefield” during the exercise for going above and beyond the expectations that are established for junior enlisted Soldiers.

“My favorite thing out here has been getting to actually do my job,” said Bergeron. “We [information technology Soldiers] had a huge role while in the field. Without communication assets, different battalions and companies can’t move around the battlefield.”

As a younger Guardsman, Bergeron used his time in the field to learn from more experienced IT Soldiers. tips they taught me to the notes I have for troubleshooting problems in our job field,” said Bergeron. “It was nice to know that my hard work was noticed by my leadership.”

“Our Soldiers trained hard and performed tremendously,” said Sandel. “We can’t thank the civilian employers and families who take care of everything back home enough for showing us great support.”

The 256th has units headquartered across the state who have stood up to support various stateside emergency response missions, to include Hurricanes Katrina, Rita, Gustav and Harvey, the Deepwater Horizon Oil Spill, and various flood events over the last four years.