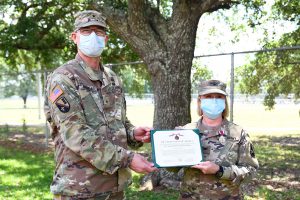 “I’d like to thank Colonel Haygood for the phenomenal job she has done as commander for almost five years, which included her recent deployment with the brigade element,” said Brig. Gen. D. Keith Waddell, adjutant general of the LANG. “I’ve known Lieutenant Colonel St. Romain since he was a brand new 2nd Lt. in New Roads, with Bravo Company 1088th. To see him come from that point to now makes me very proud, so I know he will continue to lead the Castle Brigade well.”

Haygood, a resident of Gonzales and a graduate of Louisiana State University, has commanded the brigade for over four years. During that time, she mobilized to Kuwait to serve as the Theater Engineer Brigade Commander in support of Operation Inherent Resolve, Operation Freedom Sentinel and Operation Spartan Shield. In addition, her soldiers have stood up in support of multiple state emergencies, including Hurricanes Harvey and Barry.

“Commanding the 225th Engineer Brigade over the last four years has been a rewarding experience. I have had the pleasure of serving with the best soldiers the Army has to offer and have a great deal of pride and respect for them,” said Haygood. “Lieutenant Colonel St. Romain is the right leader to take the brigade to the next level. Continue to be the leader who engages, elevates, and empowers those around you. Enjoy this time as it will go by as fast as it came.” 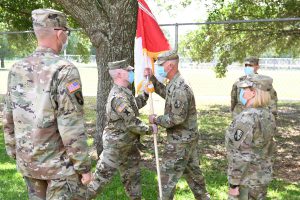 St. Romain, a resident of St. Francisville, commissioned into the LANG through the Officer Candidate School in 1998. Before assuming command of the 225th, he was the executive officer for the brigade and commander of the rear detachment of the 225th while the brigade element was deployed in 2019. St. Romain has deployed in 2004 to Camp Liberty, Iraq, in support of the Global War on Terror, and in 2014 as commander of the 528th Engineer Battalion to the Middle East region.

“Taking command of the Louisiana Army National Guard Engineers is a humbling yet honorable opportunity. The Castle Brigade is made up of true professionals that I am honored to work with each and every day,” said St. Romain. “The brigade continues to stay focused on our federal and state missions with the readiness of our soldiers as the priority. Under current conditions the Louisiana Engineers continue to ensure the safety and health of our soldiers and families.” 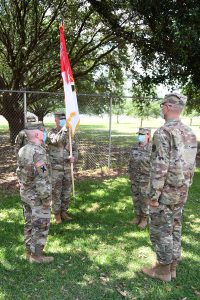 In addition to having elements overseas in the Global War on Terror since late 2002, the Castle Brigade has been activated to support emergency operations to include Hurricanes Katrina, Rita, Ike, Gustav, Harvey and Barry, the Deepwater Horizon oil spill and the multiple major flood events that ravaged Louisiana in 2016.