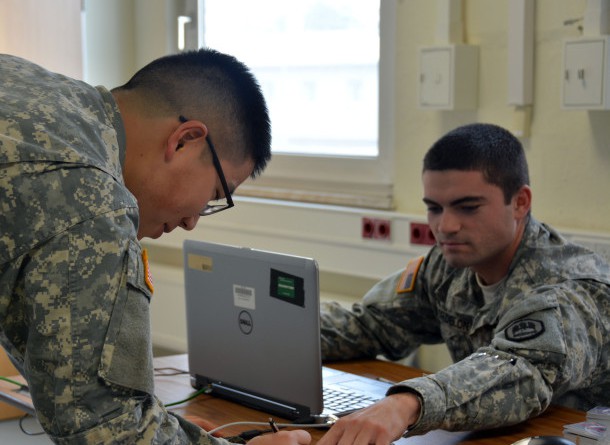 “This mission was an opportunity for our MPs to conduct a real-world operational area security mission, allowing them to put to use training that they receive annually in the Security and Mobility Support Military Police Discipline,” said 1st Lt. Matthew McKey, officer in charge of the mission.

Operation Austere Challenge tests how personnel from the North Atlantic Treaty Organization would come together and respond to a crisis within the United States Africa Command (U.S. AFRICOM).

“Too often, our Soldiers train hard with the team and then have to sit on the bench until a deployment comes around,” McKey added. “This overseas deployment training (ODT) was an opportunity for them to get in the game and affect a meaningful mission.”

Approximately 2,200 Soldiers and civilians were checked through in-processing throughout the duration of the exercise.

“Without these security clearances, we could not issue the individual a badge which allowed access to the training zones and areas,” said Spc. Joshua J. Bordelon of the 2228th Military Police Company. “Every military personnel or civilian had to come through our table to verify their level of security in order to even participate in the exercise. It was a vital stage of the in processing.”

“This mission allowed our Military Policemen to perform their job in an environment that is not training,” said Master Sgt. Timothy W. Pearson, senior operations noncommissioned officer with the 773rd. “As a joint exercise with our NATO partners, Austere Challenge required extreme security measures. Our MPs had the opportunity to help plan and provide that security.”

ODTs such as this one serve a dual purpose … Soldiers get to travel to another country to support a global mission, but they also get to educate themselves and experience different ways of life apart from their own.

“Overseas deployment training is part of the adventure of our job,” said Command Sgt. Maj. Mary G. Magee, command sergeant major of the LANG’s Recruiting and Retention Command. “It allows our Soldiers to travel to new countries, perform their mission, and experience new cultures, but at the end of the training, still come home to their community.”

During their time away from the mission, the Guardsmen of the 773rd embraced the chance to tour Germany and visit places such as the birthplace of Wolfgang Amadeus Mozart in Austria, and Nuremberg Castle, which is considered to be one of Europe’s most formidable medieval fortifications.

“We spent a lot of time in Nuremberg walking around the town and talking to people,” said Spc. Shawn H. Kimble of the 239th Military Police Company. “We wanted to get a really good glimpse of their traditions.”

For the Zachary native, this was his first trip outside of the United States.

“It was a great experience, and I would love to go back,” Kimble added. “Being with people that you know and are familiar with just made it a lot more fun than if I had just gone there on vacation.”

Pearson hopes the 773rd can continue to participate in more missions like Operation Austere Challenge, so that the MPs will have continued opportunities to practice their skills in ever changing environments.

“In an era of downsizing, events such as this illustrate to Soldiers that the Louisiana National Guard has opportunities to send Soldiers to unique places,” he stated. “In turn, this helps with retaining quality Soldiers and attracting new Soldiers to the 773rd Military Police Battalion.”