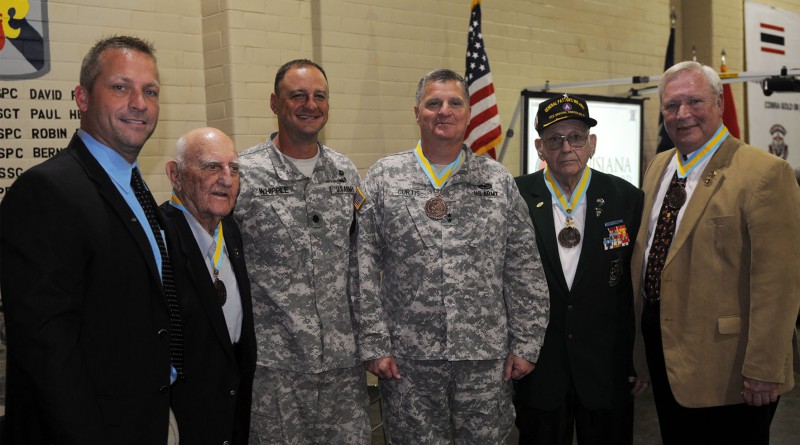 The Order of Saint Maurice is given by the National Infantry Association to those who have served the infantry community with distinction, demonstrated a significant contribution in support of the infantry and represent the highest standards of integrity, moral character, professional competence and dedication to duty.

Curtis was honored to receive the award, and even more humbled to be in the company of his fellow inductees.

“It’s an even bigger honor to stand next to these heroes of the National Guard in Louisiana who built the foundation of where we are today,” said Curtis.

The Soldiers were nominated by existing awardees and their nomination was presented to an awards board at the National Infantry Association using a vigorous vetting process to ensure the future integrity of the order.

Pauley was equally impressed by the present company sharing the Order of St. Maurice with him.

“I am so proud to receive this honor, especially on the very same day as my late father. Let’s just say it’s the most humbling event I’ve ever had,” said Pauley, who then praised the current leader of the LANG. “I don’t care what happens in the Guard, [General Curtis] is there; and anything that happens negatively in the Guard hits him in the middle of the gut. He is very deserving of this great honor.”

The United States Army created the Order of Saint Maurice in 1995. To date, more than 14,000 Soldiers and civilians have been awarded the honor.

Saint Maurice was the Primicerius of the Theban Legion in the Roman Army during the third century. Saint Maurice and his men were all Christians who refused orders from Augustus Maximian Hercules to make sacrifices to the Roman gods, and to kill innocent civilians during a campaign. Eventually, he and all of his men were massacred.