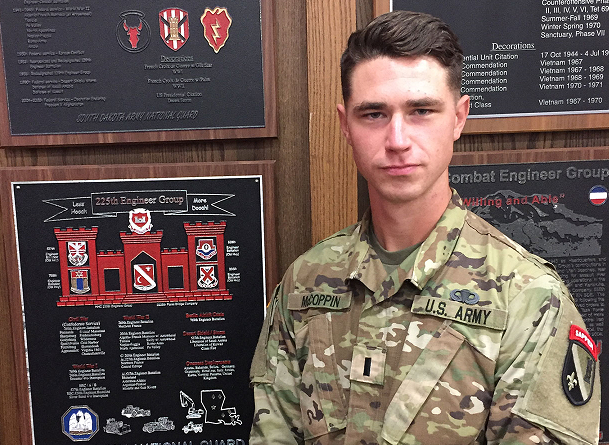 McCoppin said he wanted to attend to gain experience with the combat side of his job as well as to challenge himself and prove that he could make it. “It’s just one of those cool things,” he said.

Graduates of the sapper school support front-line infantry. They learn to perform tasks such as laying or clearing minefields, building bridges, field fortifications in addition to building road and airfield construction and repair. They become adept at camouflage, reconnaissance and advanced communication methods. They also learn how to use assault boats in water obstacles crossings, expedient road and helipad construction, engineer route and road reconnaissance.

The Metairie resident enlisted in the National Guard in 2012 as a private before finishing his bachelor’s and becoming an officer.

McCoppin’s biggest fear was being recycled and having to restart the course. “Oh yeah, I was pretty nervous. I didn’t want to have to stay any longer than the 28 days, because you can get recycled and you can end up being there a long time.”

He ended up making it in one go.

More than half of the approximately 70 Soldiers who began the course failed to graduate. The course is divided into two phases. The first 14 days cover subjects such as land navigation, mountaineering, medical, demolitions, air and water operations, weapons used by enemy forces and landmines. The remaining 14 days students learn battle drills that emphasize leadership and patrolling techniques. They are graded on urban operations, raid and ambush tactics, breaching, and patrol organization and movement.

In order to wear the Sapper tab, Soldiers must earn at least 700 out of 1000 points.

“I’ve never had that kind of physical challenge before. I had to push my body harder than I ever have before,” said McCoppin. “I had to find my limit and be able to push past it. We had to do a lot of rucks and running. My knees had swollen to the point where I couldn’t see my kneecaps which freaked me out pretty badly. I got cramps in places I’ve never had before. It almost broke me mentally, but I kept pushing through it.”

McCoppin says the school was one of the most difficult things he’s ever done in his life, including airborne school.

The Sapper course finishes with an intense field training exercise which integrates the battle drills and specialized techniques students learned throughout the course.

“One of the biggest things I got out of it personally was self-development and improved leadership skills,” said McCoppin.

McCoppin’s unit is headed to the Joint Readiness Training Center this summer at Ft. Polk. He expects to be able to share what he’s learned with his Soldiers to better prepare them for JRTC.