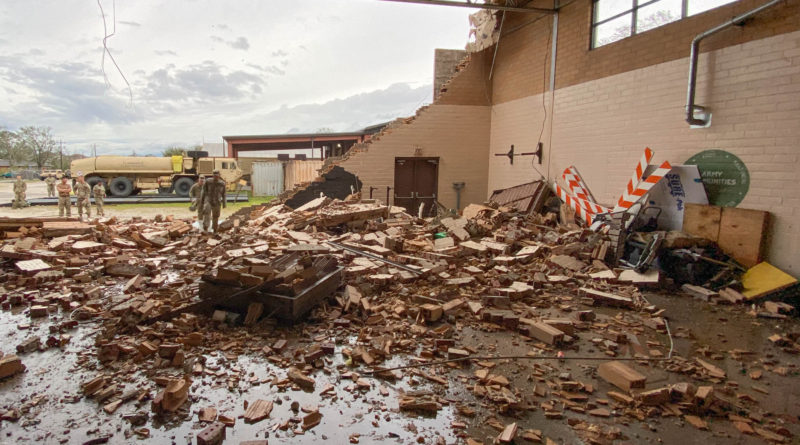 NEW ORLEANS – I’ve been a military journalist for over fifteen years, and in that time, I’ve covered a wide range of events both domestically and overseas. My first memory of a hurricane was Katrina in 2005. I was in Korea at the time on active duty, but I saw from afar the kind of havoc such a storm could wreak on coastal communities. 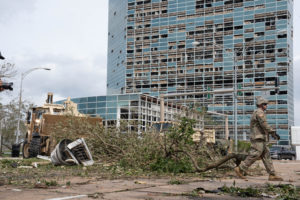 Hurricane Laura was the first hurricane I experienced firsthand — I lived through it. What I witnessed gave me a clearer understanding of not only the destructive power of these storms, but the essential nature of the Louisiana National Guard to support communities recovering following a storm’s wake.

Laura was set to hit Lake Charles the night of August 26, early morning August 27 and so, another journalist and myself hit the road and headed that way. It struck me just how few cars were headed with us towards Lake Charles versus how many cars were crawling away in immense bumper-to-bumper traffic trying to flee the impending storm.

Upon arrival, we embedded with the 3rd Battalion, 156th Infantry Regiment, 256th Infantry Brigade Combat Team in their armory located centrally in Lake Charles. The operations center was buzzing with activity as they prepared how to best respond once the storm passed.

Laura was the first major hurricane I covered since enlisting in the Louisiana National Guard just a few years ago. I was rather baffled that these soldiers hunker down and embrace the storm rather than seek refuge elsewhere and return after it had passed. The logic was clear — to establish a center of operation within the city to more quickly and effectively assist with possible rescues and other urgent missions.

Knowing this made it no easier for me, but, for the most part, everyone in the armory seemed in good spirits and remarkably calm. These guardsmen were 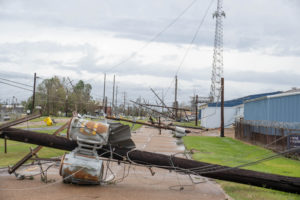 native to Louisiana and had clearly been through many hurricanes before. News outlets were predicting the storm surge to be “unsurvivable,” so my first hurricane was shaping up to be more of an adventure than perhaps I had first considered.

When night came, I managed somehow to doze off — something the experienced version of me now realizes was a bad idea. Many of the “3rd Batt” soldiers had cots set up in the drill hall, a large room with two-story high ceilings. I was staying just across from them in another room upstairs. While I was sleeping, the storm began to hit Lake Charles. Soldiers would later tell me that someone spotted the exterior doors to the drill hall beginning to buckle, so everyone moved away from the doors.

Then most of the eastern wall, all two stories of bricks, collapsed along with a portion of the roof.

This is when I woke up. I could hear the wind repeatedly slamming the armory and shaking, along with loud snapping sounds outside. I looked through the window peering into the drill hall and in the darkness saw the fresh rubble and trees thrashing. I couldn’t make out if anyone was under the debris; I made my way down to investigate.

When I made it downstairs, I saw six soldiers using their bodies to hold shut the inner doors to the drill hall in an attempt to keep the storm out. When I asked, I was told everyone made it out safely, at the direction of the battalion commander, Maj. Nicholas Acosta. If soldiers had not moved, we would have had to clear them out from under the rubble. After placing heavy objects to barricade the doors shut, everyone retreated upstairs. 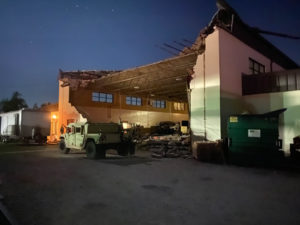 The power had gone out and makeshift lights from cell phones and glow sticks illuminated the now crowded, dark room where I had been sleeping earlier. People chattered, passing the time while the storm raged all around us. The eye of the hurricane passed over us around 3 a.m. before the storm eventually moved north through the state.

Dawn came and damage to the armory and equipment was assessed. The weighty vehicles needed for rescue and route clearance operations held up very well. From what we could see outside, Lake Charles did not fare so well. As far as the eye could see, countless utility poles had snapped and laid on the ground, homes were damaged, and tree branches were strewn across the roads.

Not too long after, soldiers from the 843rd Engineer Construction Company, 205th Engineer Battalion, 225th Engineer Brigade with their heavy wheeled bulldozers began to clear the road along the armory. They then spread their efforts outward to other areas of the city. Following the teams into the downtown area, we saw them clear massive trees and the rubble from buildings that were blocking major roads.

The damage Lake Charles sustained was primarily from wind damage; surprisingly, there was very little flooding. As the day progressed, it became increasingly clear the city faced a long road to recovery. I counted hundreds of downed utility poles, while smashed homes and businesses littered the landscape.

Once roads were sufficiently clear, guardsmen in high-clearance vehicles were ready to begin search and rescue operations. Lists with addresses of potential rescues needed were compiled by local authorities and provided to 3rd Battalion. Captain Alexander Langley headed the search and rescue operations in Calcasieu Parish. With a list in hand, soldiers loaded into their vehicles and headed out.

We followed the soldiers to a veterinary clinic where they checked to see if the people or animals needed assistance. We saw them enter a collapsed business 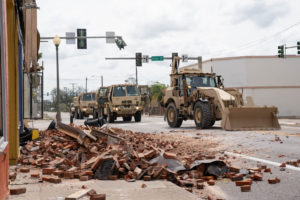 to assist local authorities to look for possible casualties. We saw them pick up a young couple whose house was “simply gone,” in their summation. We saw them go door-to-door knocking looking for anyone who either needed assistance or wanted to evacuate. These residents were facing weeks or possibly months of living with no electricity or running water in the Louisiana summer heat.

Stranded residents who wished to evacuate boarded the high-water vehicles. Every time a team finished the given list of potential evacuations, they dropped the citizens off at “lily pads,” which are consolidation points where food and water is given out before busing them to shelters. After that, guardsmen would get a new list and repeat the process until all their lists were exhausted.

Laura was a category four hurricane with maximum sustained winds of 150 miles per hour and was the strongest hurricane to strike Louisiana in over 150 years. 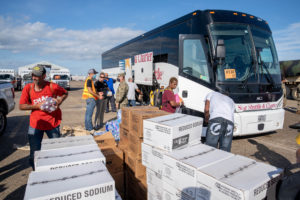 Personally and professionally, it’s been an eye-opening experience to see just what kind of destruction hurricanes in Louisiana can inflict on the communities that reside here. The tolls they exact from residents are more than financial; they are emotional as well.

Seeing for myself how the Louisiana National Guard works hand-in-hand with local authorities to support disaster relief efforts validates for me a large reason why the Guard exists in the first place. Guardsmen are members of the very communities in which they serve, whatever that role may require of them.