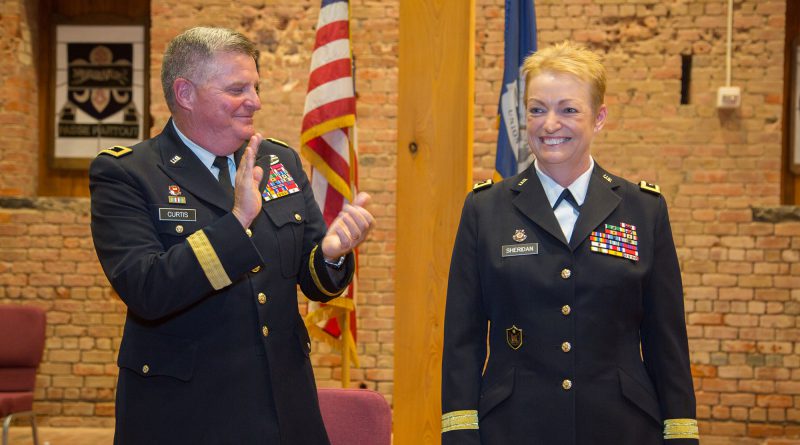 For Sheridan, getting this far was never foremost in her mind.

“Early on in my career, my goals were always kind of short term goals,” said Sheridan. “I never really looked too far out, but when I made one star and started getting the questions about what does it mean to you to be the first female general officer and what do you think it means for the organization? You know, you start to reflect a little bit on what got you there.”

Sheridan attended Northeast Louisiana University in Monroe, where she received a Bachelor of Arts degree in sociology. Sheridan received her commission through the Reserve Officer Training Corps in May 1983 and served on active duty until September 1988.

In 1988, Sheridan joined the LANG and deployed in support of Operation Iraqi Freedom in 2008, where she served as the director of the project management office on the Task Force to Improve Business and Stability Operations.

She recalled that short term goals were how she advanced. She described her promotion as “humbling” and “such an incredible honor.” For the Soldiers in her care who might want to follow in her footsteps, her message to them was clear and emphatic.

“You can achieve anything if you set your mind to it and set those goals,” said Sheridan. “It’s possible for females to get ahead in the military. You’re not limited by gender. Certainly with the new women in combat roles that have opened up, we’re going to see a lot more of this across the board.

“Just set a goal and move forward. As long as you’re moving forward you’re going to achieve something whether it’s becoming a general officer, a command sergeant major or a chief warrant officer five. Whatever that top level is on the path that you’ve chosen, just continue to move forward,” said Sheridan.

Maj. Gen. Glenn H. Curtis, adjutant general of the LANG, congratulated Sheridan during his speech and remarked, “She is one of the most gracious, determined and insightful leaders that I’ve been around.” Curtis praised Sheridan for her dedication and resiliency throughout the years.

Sheridan’s father, retired Command Sgt. Maj. Joe S. Fernald, along with her husband Mark, pinned Sheridan, removing her Brig. Gen. rank and replacing it with her new Maj. Gen. rank to the resounding applause of the room.

“People are the most important thing in any organization,” advised Sheridan.  “You want to make sure that they have a great quality of life and are able to advance their careers in a way that is meaningful to them and to the organization. I hope that I can continue to provide some leadership that helps Soldiers attain their goals.”

Sheridan is the daughter of retired Command Sgt. Maj. Joe S. Fernald and the late Marion Colbeth Voita. She and her husband Mark reside in New Orleans and have two sons, Patrick and Daniel.