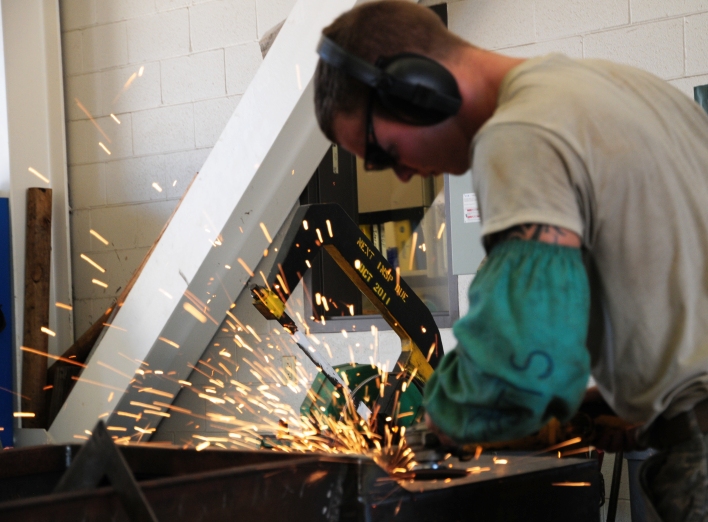 Moves on to next phase of competition

PINEVILLE, La. – The Louisiana National Guard’s Combined Support Maintenance Shop was recently selected as a semifinalist for this year’s Army Award for Maintenance Excellence and was visited by national evaluators in Pineville, Jan. 31, for the next phase of the competition.

In Phase I of the competition, CSMS placed first in its size category at the National Guard Bureau. They were judged on a written presentation which counts for 30 percent of their total score.

Lt. Col. Vincent Tallo, CSMS superintendent, said that planning for even the first phase of competition took months of preparation. “Our initial work on the AAME packet began in June 2011. This was my first go at competing for the award, so a lot of time was spent looking at previous winners’ packets and reviewing the checklists,” he said.

“We received notification in December that our visit would be in January, so we focused on facility maintenance and cleanup, updating our maintenance reports, duty appointments, etc.,” said Tallo. “During January, we conducted weekly meetings with all supervisors to ensure we were ready for the visit.”

The AAME program, established in 1982, is designed to reward excellence in maintenance as a means to improve and sustain readiness, improve efficiency and reduce waste, recognize outstanding maintenance accomplishments and initiatives, and to encourage competition.

The winners of the AAME will be announced in April at an awards banquet in Washington, DC.

The LANG CSMS employs 96 full-time staff and is one of three tenants occupying the Consolidated Maintenance Facility, which is a 268,000 square foot, 88 work bay state of the art facility covering 55 acres at Esler Air Field in Pineville.  The CMF is the largest National Guard facility of its kind in the country.