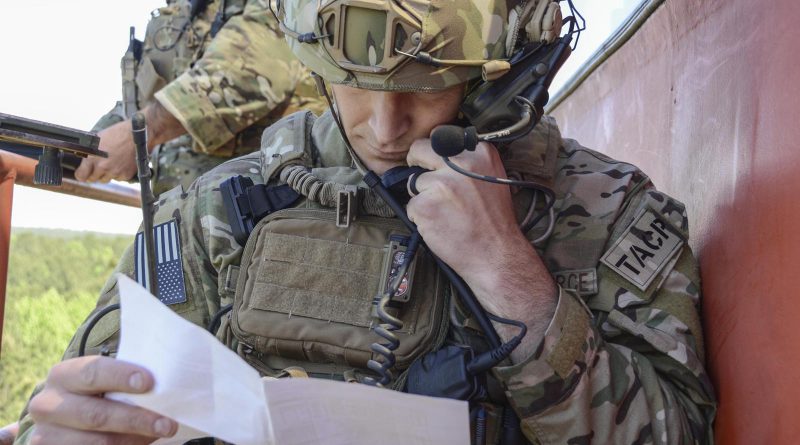 JTAC operators are a part of the Tactical Air Control Party, and are qualified individuals who direct the action of close air support, call airstrikes and gun runs while on a battlefield. The Air Guard and Air Force JTAC typically deploy in one or two man teams in support of Army units, but can be attached to other branches as well.

“As a JTAC, we work with ground forces from any branch of service in a domestic or international setting,” said Tech Sgt. Louis Awua, an evaluator for the 122nd. “You have to be proficient in your ground skills, such as moving and shooting and proficient in the use of communication and target equipment.”

Airmen from the 122nd have to perform an evaluation every 18 months to stay current on their JTAC qualifications.

It can take an Airmen up to two years to become a qualified JTAC. After an initial five month course, Airmen graduate as a JTAC apprentice. They then move on to complete 130 training days at the unit and the JTAC qualification course. Once completed, an initial evaluation is performed.

“I was just concerned with doing my job right,” said Airmen 1st Class Timothy Cormier, a Hammond native with the 122nd ASOS, who conducted his JTAC evaluation. “You’re handling an aircraft that moves faster than the speed of sound and dropping ordnance that can cause serious harm, so you want to make sure that you keep your guys on the ground as safe as possible. You want to make sure that you’re being as safe as possible.”

“For the control phase, the JTAC are given the mission and given a day to plan the mission,” said Master Sgt. Mark Simpson, a Westlake native and noncommissioned officer in charge of evaluations at the 122nd. “They will set up coordination with the operations section, ground forces and air support during the planning period just like they would in an actual mission.”

Once the mission has been planned, the JTAC prepares his equipment that will be needed to complete the mission. The evaluator will simulate being the ground commander and give the JTAC a specific target that needs to be hit to ensure mission success.

Using long range radios and targeting equipment, the JTAC being evaluated keeps watch on a target location as part of a scout unit looking for specific targets and personnel in the area.

The Navy provided two F-18s from the Naval Air Station Joint Reserve Base in New Orleans to support the exercise. Once the jets checked in they were instructed to drop simulated bombs on the target location after confirming the target. Once the initial target was eliminated, the JTAC being evaluated began guiding the pilots to the next target.

While being evaluated, evaluators make sure that JTACs are following the proper procedures, and that they have the ability to safely conduct tactical air control.

“We don’t just look for being able to follow procedures; we also look for certain characteristics in our JTACs,” said Awua. “Some of those characteristics are someone who leans forward, seeking questions and information and being proactive when given direction.” During natural disasters, the 122nd provides the LANG with communications capability and assist with search and rescue missions. The 122nd monitors different radio frequencies and then provides information such as locations of loading zones and aircrafts that are in the air to search and rescue teams.

“We send out two man teams with our vehicles to set up communications throughout the state,” said Simpson. “They are able to set up satellite, over the horizon and regular line of sight communications. They link up with the our teams at the Governor’s Office of Homeland Security and Emergency Preparedness and the Joint Operations Center to get the information where it needs to be to get help where it’s needed.”

The 122nd falls under the 159th Fighter Wing and is headquartered in Pineville. The 122nd JTACs are currently preparing to participate in Saber Strike in June, which is an ongoing cooperative training designed to improve joint interoperability through a range of missions that prepare the 13 participating nations to support multinational contingency operations.