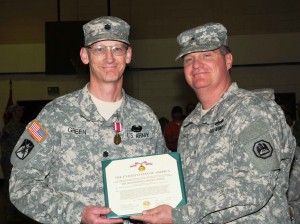 BOSSIER CITY, La. – Outgoing commander, Lt. Col. Randy S. Green of Bossier City, La., received the Meritorious Service Medal from Brig. Gen. Glenn H. Curtis, the Louisiana National Guard’s adjutant general during a change of command ceremony, April 22, 2012. Green relinquished command of the 165th Combat Sustainment Support Battalion to Lt. Col LaDenna M. Piper. “It has been an honor and privilege to serve as the 165th CSSB commander over the last three years. I truly appreciate the opportunity given to me by the adjutant general, and will always appreciate the friendships formed while we worked together to accomplish the missions assigned,” Green said. (U.S. Army photo by Sgt. Robin Perry, Louisiana National Guard Public Affairs Office/Released)