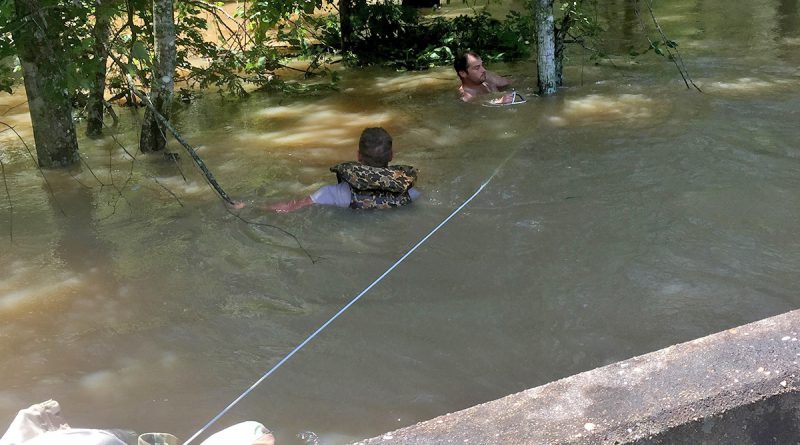 Sgt. PJ Freeman and Sgt. Jared LeBlanc, both with the 922nd Engineer Company, 205th Engineer Battalion, were returning to their boat launch site near Highway 16 when they saw the citizens struggling in the strong currents near a low-elevation bridge.

“We really didn’t have many options at the time. The guy was holding onto a tree in a strong current, and our only mission at that point was to get him out of there,” said Freeman. “I jumped in the water and got sucked in by the current instantly and had to grab onto a tree [branch] to prevent myself from going under the bridge. I then grabbed another tree close to the citizen and grabbed his arm as Sgt. Leblanc grabbed his other arm and pulled him to safety.”

The four local residents had been trying to return to their residence to check on their property when the current flipped their boat. “The current was moving extremely fast, and the situation could have turned from bad to worst in a matter of seconds,” said Freeman.

Freeman, who is from French Settlement, knew the waters well and was confident he and LeBlanc, from the Baton Rouge area, could accomplish the immediate mission.

Using a rope and exercising safety by using their lifejackets while swimming, they were able to pull all four citizens to safety.

“Our group has come together and made sure everyone we came in contact with, was put first. We made sure they received everything we could offer to them,” said LeBlanc. “It’s a great feeling to know you helped save lives.”

“French Settlement is my home and this is where it all took place, so it kind of hit close to home for me,” said Freeman. “Just knowing we were able to help someone is an amazing feeling. It’s a heart breaking situation to see the homes of others and the rough journey they have ahead of them, but as a whole, things could be a lot worst. And for that, I’m grateful.”

Since search and rescue operations began on Saturday, August 13, the Louisiana National Guard has rescued more than 19,000 citizens and approximately 2,600 pets.