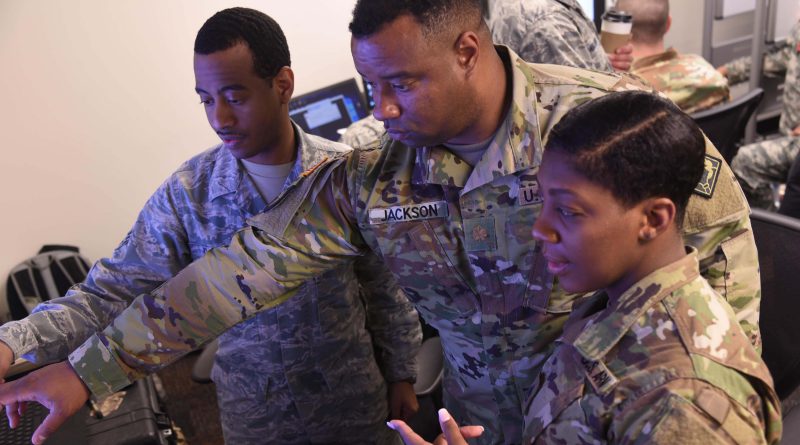 Cyber Shield is an Army National Guard exercise run in cooperation with the U.S. Army Reserves and other organizations to conduct defensive cyber operations training over a two-week period.

“As time has evolved, we realized that we needed to focus on [non-military] networks,” said LANG Lt. Col. Henry Capello, the exercise commander. “When a governor asks for help, we have to understand what [the problem] looks like. What do your state systems look like? What does your critical infrastructure look like?”

Approximately 20 Louisiana Soldiers and Airmen are training with 850 other Guardsmen from over 42 states and territories, as well as several federal agencies including the FBI, Department of Homeland Security and more than 30 non-government entities including Entergy, Lockheed Martin, Monsanto and Louisiana State University.

The training simulates real-life cyber attacks by having opposing teams battle it out. The red team is the opposition force assigned to test the skills of the defenders, or blue team. During the simulation, participants react in real-time and employ defensive maneuvers.

“Realistic training such as this continues to allow our operators to hone their skills,” said Maj. Alan Dunn, commander of the LANG’s DCOE and CDIRT. “This training allows us to work side-by-side with civilian industries in a realistic environment.”

The exercise is meant to practice incident response at the state level, conduct cyber threat intelligence and analysis and to facilitate forensic analysis and collective response tactics, techniques and procedures. A training exercise of this scope also establishes relationships between various states, agencies and businesses participating, which makes sharing information and collaboration much easier.

“This exercise prepares us for real-world cyber events and working in different environments,” said Tech. Sgt. Joseph Mitchel of the 159th Fighter Wing, CDIRT and a New Orleans resident. “It also teaches us how to work as a cohesive cyber team with more entities than we The CDIRT is a team that is currently exclusive to Louisiana and is made up of Soldiers and Airmen from various units who have backgrounds in cyber defense in their civilian lives. In addition to Cyber Shield 17, the LANG CDIRT and DCOE train quarterly at Louisiana State University’s Stephenson Disaster Management Institute in Baton Rouge.