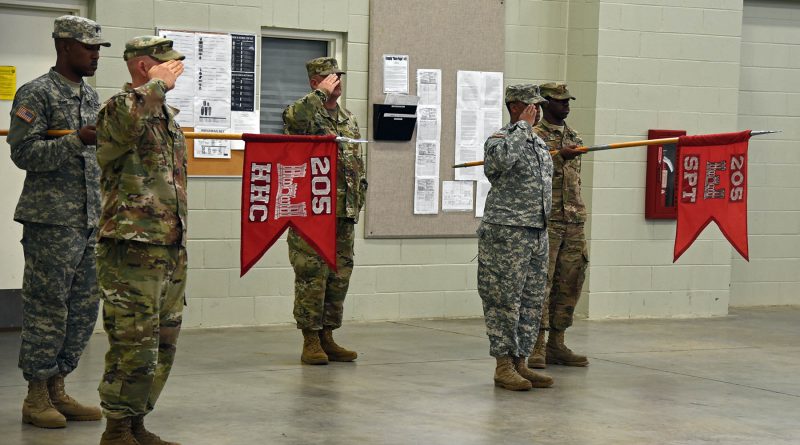 Davis, a Metairie native, assumed command from Lt. Col. Robert “Chad” Herndon, a resident of Gonzalez, who has served as commander since March 2014.

“Maj. Gen. Curtis, I’d like to thank you for the opportunity that you’ve given me,” said Herndon. “I’m truly grateful and humbled that I’ve had the opportunity to command the 205th Engineer Battalion.”

Herndon, a 27-year veteran, enlisted in the LANG as a combat medical specialist with Headquarters Support Company, 528th Engineer Battalion, 225th Engineer Brigade in 1990. After spending two years as an enlisted Guardsman, Herndon was commissioned as a second lieutenant after completing officer candidate school at Camp Beauregard in Pineville in 1992.

Herndon held many leadership and command positions in the 225th over his nearly three-decade career.

“Chad, you’ve done a phenomenal job throughout your career and you’ve always deserved the right to take the next steps in leadership in our organization,” said Maj. Gen. Glenn H. Curtis, adjutant general of the LANG. “What you did with the command team here at the 205th was phenomenal, so congratulations on a successful command. I’m sure you have a bright future moving forward.”

Herndon deployed to Kandahar, Afghanistan in 2004 in support of Operation Enduring Freedom. He has also mobilized stateside in support of Hurricanes Katrina, Rita, Gustav, Ike, and Isaac, the Deepwater Horizon Oil Spill and most recently the devastating floods in 2016.

Herndon holds a Bachelor of Business Administration, Major Marketing, from the University of Louisiana at Monroe. He has also attended several military schools.

Davis enlisted in the LANG as a signal systems support specialist in the 205th’s Headquarters Support Company in 1997. He was commissioned as a second lieutenant after completing officer candidate school at Camp Beauregard in Pineville in August 2002.

“This is a very special milestone in my career,” said Davis. “Over 20 years ago, as a high school student, I enlisted into the 205th with the hopes of serving my country and the desire to earn a college degree … little did I know that I was joining a family. I am truly humbled by the awesome responsibility of this post and look forward to serving the professional Soldiers of the 205th Engineer Battalion no matter the challenge.”

Davis attended Bogalusa High School and graduated in 1997. He then graduated from Southeastern Louisiana University in Hammond with a Bachelor of Arts in Management in 2005 and from Grantham University in Lenexa, Kansas, with a Masters of Business Administration in 2013.

Davis deployed to Afghanistan in 2003 as a platoon leader with the 205th in support of Operation Enduring Freedom and was activated to support the relief efforts after Hurricanes Katrina, Rita, Gustav and Ike. He also deployed to Haiti following the devastating earthquake in 2010. “Josh, I’m glad you said yes to coming home and commanding the 205th,” said Curtis. “You’ve done all the right jobs to lead you to this point, so congratulations to you.”

The unit has activated numerous times for stateside emergencies to include Hurricanes Betsy, Camile, Katrina, Rita, Gustav, Ike and Isaac, as well as the Deepwater Horizon Oil Spill in 2010 and the major floods of 2016.