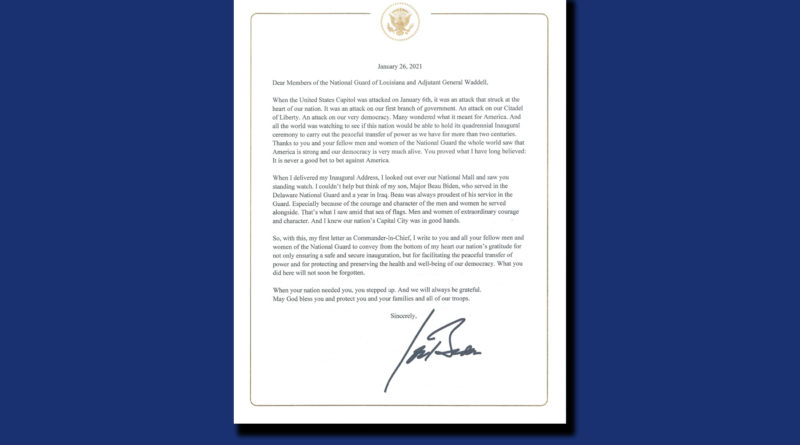 Dear Members of the National Guard of Louisiana and Adjutant General Waddell,

When the United States Capitol was attacked on January 6th, it was an attack that struck at the
heart of our nation. It was an attack on our first branch of government. An attack on our Citadel
of Liberty. An attack on our very democracy. Many wondered what it meant for America. And
all the world was watching to see if this nation would be able to hold its quadrennial Inaugural
ceremony to carry out the peaceful transfer of power as we have for more than two centuries.
Thanks to you and your fellow men and women of the National Guard the whole world saw that
America is strong and our democracy is very much alive. You proved what I have long believed:
It is never a good bet to bet against America.

When I delivered my Inaugural Address, I looked out over our National Mall and saw you
standing watch. I couldn’t help but think of my son, Major Beau Biden, who served in the
Delaware National Guard and a year in Iraq. Beau was always proudest of his service in the
Guard. Especially because of the courage and character of the men and women he served
alongside. That’s what I saw amid that sea of flags. Men and women of extraordinary courage
and character. And I knew our nation’s Capital City was in good hands.

So, with this, my first letter as Commander-In-Chief, I write to you and all your fellow men and
women of the National Guard to convey from the bottom of my heart our nation’s gratitude for
not only ensuring a safe and secure inauguration, but for facilitating the peaceful transfer of
power and for protecting and preserving the health and well-being of our democracy. What you
did here will not soon be forgotten.

When your nation needed you, you stepped up. And we will always be grateful.
May God bless you and protect you and your families and all of our troops.