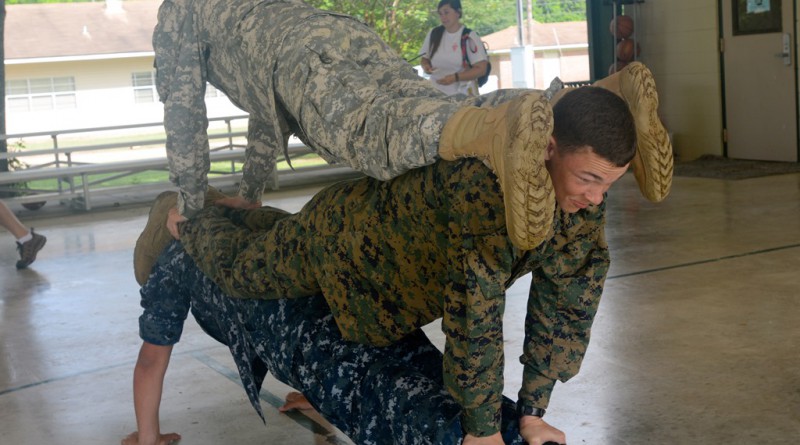 NEW ORLEANS – April is Month of the Military Child, a month to encourage community awareness and support of military children, and, on April 15, people were urged to wear purple in recognition of the sacrifices and challenges of children of service members in the United States military, including its reserve forces.

The children of Louisiana National Guardsmen are among those that deal with these issues, including frequent absences of a parent – often during critical milestones in their lives – due to drill weekend, annual training, emergency state operations and overseas deployment.

In an Army proclamation issued by John M. McHugh, Secretary of the Army, along with Gen. Raymond T. Odierno, Army Chief of Staff, and Sergeant Major of the Army Daniel A. Dailey, the importance of military children was stressed.

“Each day, military children undergo unique challenges, which they face with resilience and dignity beyond their years, and it is essential to recognize that military children make significant contributions to the country while dealing with uncertainty and concern for their parents during extended hours and long deployments.”

Maj. Ebony Carter, director of the Office of Family Programs for the LANG, echoed this sentiment and talked about the unique characteristics faced by children of Guardsmen.

“Here in our state, we have the opportunity to have a closer relationship with our families than a lot of our active-duty counterparts because we are less transient. We tend to stay with our units for longer periods of time, and our kids grow up together,” Carter said.

Carter also said that among the many youth programs offered, the LANG Youth Leadership Camp and Kids Annual Training, which are both held in June, stand out as the most significant.

“Purple Up Day is a great opportunity to show support this month for the children of Louisiana National Guard service members,” said Maj. Gen. Glenn H. Curtis, adjutant general of the Louisiana National Guard. “The LANG works hard to “purple up” all year long with outstanding programs and services for children of all ages, such as the summer camp programs hosted by our Child and Youth Program. Not only do our youth have fun and develop leadership skills, they have a special forum where they can share their stories and experiences with each other and with caring adults who understand military life.”