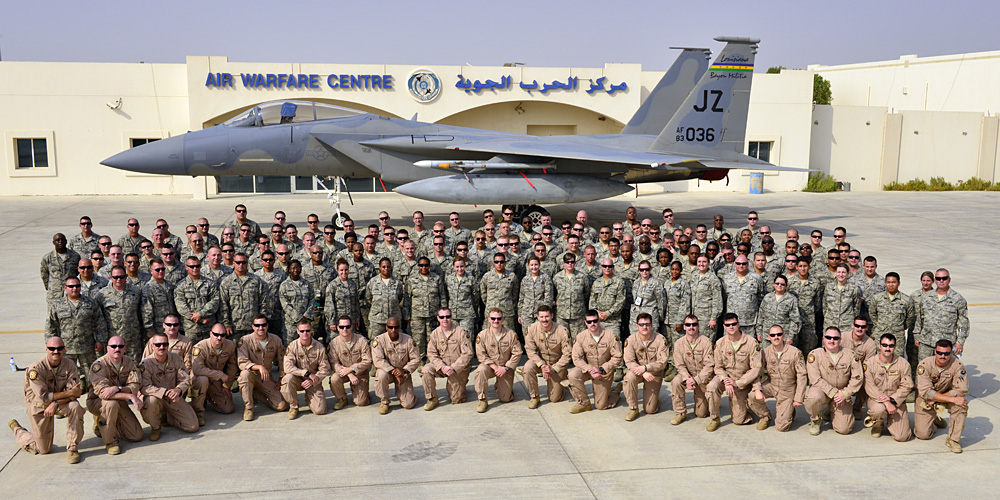 What value do Air Guardsmen bring to America … the ability to provide combat capabilities or something more?

NEW ORLEANS – As the commander for more than three years of the 159th Fighter Wing, Louisiana Air National Guard, I’m proud of our continued history of mission success. When I speak with other wing commanders, we are all in agreement that, as time goes by, we ask more and more of our Airmen. With a major Operational Readiness Inspection or Unit Compliance Inspection every 24 months, and regularly scheduled Health Services Inspections, audits, Staff Assistance Visits, and other “opportunities to excel,” the pace never seems to slow. In addition, units with an Aerospace Control Alert mission also face Alert Force Evaluations. Combined with the occasional deployment for training, exercises to prepare for inspections, and a real-world Aerospace Expeditionary Force, things really start to get busy. Throw in an emergency of some sort — for which the state often activates Guardsmen to engage in disaster response — and white space on the calendar becomes as scarce as fighter pilots in heaven.

As Guardsmen, this tempo is simply part of our reality. It is partially a result of our movement from a strategic reserve to an operational force in the early 1990s, and increased U.S. military involvement worldwide following 9/11.  Frankly, we welcome the opportunity to be in the fight. We know that the nation can mobilize us for an AEF. Those of us with an ACA mission know that we must stand ready on alert 24 hours a day, 365 days a year.  We know that should our state need us for disaster response, we must be instantly available to answer the call. We expect — indeed anticipate and welcome — the call should any of these events necessitate our response. However, I never expected the 159th FW would be called upon to do all three at once. Therein lays the story …

It all started during the summer of 2012. Following a December 2011 UCI, an April 2012 Chemical, Biological, Radiological and Nuclear Event Enhanced Response Force Package Exercise/Evaluation, and an HSI in May 2012, the entire wing was looking forward to a brief respite before deploying Airmen and aircraft overseas for an AEF rotation in early July. We did get a slight breather during that time, but I was a bit taken aback, as were all that live on the Gulf Coast, when June spawned no less than four named storms in the first three weeks of the season — the first time this has happened since record keeping began in 1851. Obviously, we were in for a busy hurricane season. Still, none of the storms threatened Louisiana, and our preparations for deployment continued while we kept a wary eye on the tropics.

With much fanfare, 12 aircraft and 250 Airmen departed in July for a 90-day AEF rotation. Like many ANG deployments, this one lacked mobilization authority so volunteers stepped up to accomplish the mission. Despite the certainty of withering heat in the Middle East during the hottest months of the year and the uncertainty of the political stability in the region, the ANG filled every position needed. Clearly the Airmen were eager to perform this real-world mission.

This deployment did not relieve the 159th FW of our ACA mission. Like every other ANG unit with simultaneous alert commitments and AEFs, we manned both missions, stretching our resources to the max to meet requirements.

While our deployed Airmen baked in the Middle East sun flying large force employment sorties with dissimilar aircraft, July turned into August. We settled into a new norm at home station: a limited flying schedule with minimum available full-time manning due to the deployment. We all looked forward to the time when the muggy New Orleans summer would give way to cooler autumn temperatures heralding the return of our deployed Airmen. We soon discovered the heat was the least of our problems.

Aug. 15 a tropical wave crossed over the west coast of Africa into the Atlantic Ocean. By Aug. 21 the storm was just 1,200 miles east of Hispaniola and its convection had increased to the point that the National Hurricane Center announced this disturbance had become Tropical Depression 9. Based on data gathered from the “Hurricane Hunters” later that day, the NHC upgraded it to a tropical storm and gave it a name — Isaac.

By Aug. 24, Tropical Storm Isaac had survived land interaction with Hispaniola and Cuba and was now in the Gulf of Mexico with nothing but warm water – perfect for intensification — between it and land. With each passing day, it became more clear that Isaac would very likely make landfall somewhere on the Gulf Coast. Early forecasts predicted a probable landfall in the Florida panhandle region or possibly as far south as Tampa, Fla. However, those of us who pay close attention to such things noticed that Louisiana remained in the western edge of the forecast cone.

Knowing that the average error in a five-day forecast is over 200 miles, I continued to monitor the progress of Isaac throughout the day on Saturday. The forecast began to move slowly to the west. As Sunday dawned, the state awoke to the very real possibility of a Louisiana landfall. I made the call to evacuate all but the armed alert fighter aircraft, which we would leave on status for as long as weather and winds would allow.

Though Isaac’s winds had not reached hurricane strengths, it was forecast to become a Category 1 or 2 before landfall. Maj. Gen. Glenn H. Curtis, the adjutant general of Louisiana, activated our Joint Operations Center and we initiated a recall of essential personnel and those who were in critical mission sets involving security and commodity distribution. By Monday, we had 400 Airmen preparing for Isaac’s arrival. We left our alert fighter aircraft on status until just before strong winds shut down the base, at which time we evacuated them to Florida.

Isaac finally gained hurricane status on the morning of Aug. 28. It brushed outlying portions of the state before making landfall on the Louisiana mainland Aug. 29, seven years to the day after Hurricane Katrina. Though Isaac was a Category 1 with relatively low winds, its slow forward groundspeed, strong storm surge, and extremely heavy rainfall proved to be particularly destructive for New Orleans, and its environs. Several entire communities were inundated with water to the rooftops. Southern Plaquemines parish was cut off from the rest of the state by flood water across the only roadways providing access to this isolated area. Louisiana Gov. Bobby Jindal authorized 100 percent activation of the Louisiana National Guard. We recalled another 500 Airmen to duty.

Initial assignments for our Airmen included security and support to shelters. Many of the local governments ordered evacuations of their lower-lying areas. When residents of the affected areas reached high ground, Airmen were there to greet them as they moved into auditoriums, gyms, and meeting halls. Airmen made sure that they had food and water, and ensured their safety and well-being.

As part of our disaster response plan, the Louisiana NG designated the 159th FW to provide support to Plaquemines parish as a main area of responsibility. This was one of the hardest hit parishes in the state. Just hours after landfall, Airmen were rescuing citizens from their flooded homes. Another group of Airmen provided critical assistance evacuating a nursing home whose residents were in danger due to a power outage. Further south, where the flooded roads made travel by land impossible, an Airman was instrumental in coordinating an aero-medical evacuation for a child with a life-threatening fever.

Meanwhile, yet another set of Airmen established six points of distribution for critical items such as food, water, ice and tarps. Three of these PODs were in locations impassable by civilian vehicles. Thousands of people per day received vital commodities that were otherwise unavailable due to damage and power outages.

In short, Airmen saved lives, protected property, and assisted the residents of Louisiana in every imaginable way. Keep in mind that many of the Airmen responding to this storm also received major damage to their own homes. Despite the uncertainty surrounding their own property, they continued to protect and sustain others.

By Friday afternoon, Isaac had progressed into northern Louisiana and beyond, leaving blue skies over New Orleans. With the advent of good weather, I ordered our alert fighter aircraft to return as soon as we confirmed that our runways were clear and the control tower was operational. At 3:30 p.m. four F-15 Eagles landed at Naval Air Station Joint Reserve Base New Orleans. Alert personnel refueled the fighter aircraft, performed post-flight inspections, and at 4:40 p.m., less than 63 hours after landfall of Hurricane Isaac — despite the fact that 159th FW buildings received an estimated $10-12 million of damage as a result of the storm — the 159th FW had fighter aircraft back on alert status.

To the best of my knowledge, this was an unprecedented return to alert status for a flying wing directly impacted by a natural disaster like Hurricane Isaac, and demonstrates our state leadership’s total commitment to the alert mission. While I waited to inform the adjutant general that we were back up at alert, I received another phone call from the 159th Command Post. “We just scrambled.” Less than one hour after resuming alert duties, two F-15 Eagles roared into the Louisiana sky in pursuit of a target of interest over the Gulf of Mexico. I had to smile …

Despite 42 months commanding a unit that excelled in five major inspections, successfully deployed hundreds of Airmen into the area of responsibility, and participated in three overseas Dissimilar Air Combat Training deployments, this moment was the high point of my command as more than 1,150 Airmen performed flawlessly and selflessly, responding to the call of duty from their nation and their state. The Louisiana ANG was fully engaged on three fronts, performing federal missions overseas and on alert while simultaneously executing our state disaster response mission.

In this time of financial constraints, heated debate about the proper balance of Air Force Active Component and Reserve Component, and accessibility, cost, and responsiveness of Air Guardsmen, this is a story that we must tell clearly and often. This is not simply the story of the 159th FW’s summer of 2012, but a testament of the ANG writ large. This is a great story not because it is unique; it is a great story because it is not. It is yet another example from the 54 states and territories of the Guard doing what the Guard is designed to do — deploying overseas as an operational combat force, saving lives during natural disasters, and keeping vigilant watch over the homeland 24/7. The Louisiana ANG happened to do all three at once. I doubt you’ll find a clearer example of the value provided by the ANG both at home and abroad.