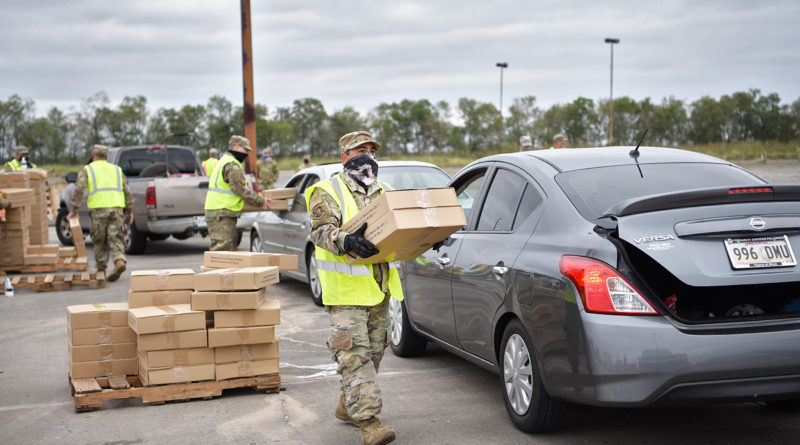 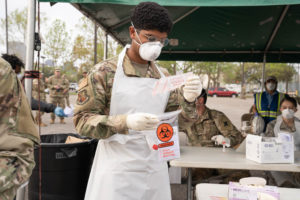 NEW ORLEANS – The year 2020 has been an unprecedented year for the Louisiana National Guard. Between COVID response efforts, the busiest hurricane season since 2005 and a series of deployments, the LANG supported the longest emergency response effort in the state’s history.

March saw Louisiana’s first COVID-19 case. Gov. John Bel Edwards declared a public health emergency and issued a stay-at-home order, but as the virus spread, thousands of cases were reported and the number of dead had only begun to accumulate.

The LANG supported relief efforts early on, and throughout the remainder of 2020, thousands of soldiers and airmen operated up to 25 medical testing sites and eight food banks on a daily basis. The LANG administered more than 300,000 tests, packaged more than 21 million pounds of food, distributed more than 56 million personal protective equipment items and completed more than 4,500 PPE delivery missions of masks, gloves, ventilators, and Tyvek suits … to only name a few.

In April, three tornadoes hit Ouachita Parish and the LANG assisted in clearing nearly 600 loads of debris. During that operation, soldiers packed more than 700 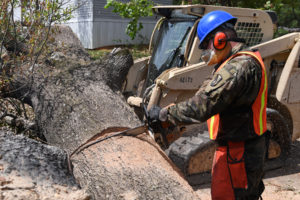 boxes of food, per day, to residents in need during the stay-at-home order.

In June, the LANG began preparations for the 2020 hurricane season while continuing COVID response missions. The LANG supported hurricane relief efforts for hurricanes Laura, Delta and Zeta along with preparing for four additional named storms (Cristobal, Marco, Sally, and Beta). More than 400 generator missions were fulfilled with two missions currently ongoing. Approximately 5,745,937 meals, 7,878,028 liters of water, 1,431,350 bags of ice and 267,431 tarps were distributed; 439 people and 35 pets were evacuated and 2,662 miles of road and 210 municipal facilities were cleared.

During hurricane relief efforts, the LANG stood up to protect lives and property, maintain communications and ensure the continuity of operations and government. More than 3,000 guardsmen were called up for Hurricane Laura preparations alone. It was the tenth-strongest U.S. hurricane landfall by wind speed on record. The storm caused the deaths of at least 42 people in the U.S. and inflicted an estimated $14 billion in damages on southwestern Louisiana and southeastern Texas near the Gulf of Mexico. 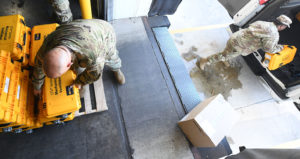 By the end of August, more than 6,200 guardsmen were supporting COVID and hurricane relief efforts simultaneously.

In October, just 43 days following Hurricane Laura impact, Hurricane Delta was set to smash through the same geographical area. Fortunately, within 22 hours of making landfall, Delta was downgraded to a tropical storm, so while damaging, was not quite as powerful as its predecessor. The LANG evacuated 37 people and 3 pets, established 31 points of distribution for food and water, and delivered an additional 75 generators to the same areas already heavily impacted by Hurricane Laura.

By mid-November, the LANG had scaled its COVID and hurricane relief efforts down to more than 800 soldiers and airmen, as the need for LANG assistance 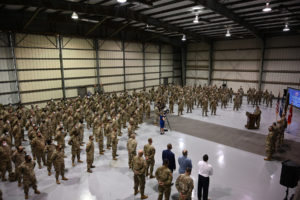 depreciated with the restoration of power and utilities in affected parishes.

Throughout the year, the LANG responded to 15 cyber open-source missions, with response time taking from one week to two months. The LANG continues to be part of the collaborative cyber response since July of 2019.

Though 2020 was the LANG’s busiest year on record, the organization achieved its highest retention rate in the last two decades at 82%, which is a testament to the dedication and selfless service of its guardsmen.