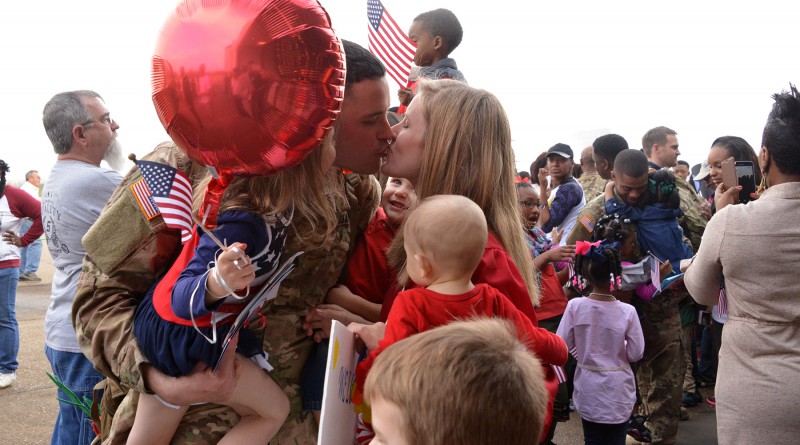 More than 150 Soldiers with the 1023rd, headquartered in Bastrop with detachments in Monroe and Clarks, completed their 10-month deployment to Kuwait, with additional missions in Iraq, Jordan and Afghanistan. The Soldiers provided vertical engineer construction operations in the Kuwait theater of operations in support of Operations Enduring Freedom, Freedom Sentinel and Inherent Resolve.

Maj. Gen. Glenn H. Curtis, the adjutant general of the LANG, waited with the eager crowd to welcome home the unit. This is the first time since 2002 that the LANG does not have a unit deployed to a combat zone.

“There’s not a better feeling in the world than to see your kids’ faces [when you return from deployment],” he said.

During the course of their deployment, the 1023rd completed numerous vertical projects in the four different countries. In Kuwait, the engineers helped update the Kuwait Naval Force facilities on the Kuwait Naval Base with extensive plumbing renovations, including shower and latrine facilities. They also worked on the first-ever joint construction effort between Kuwaiti Navy and U.S. Army engineers to build pavilions, decks, and other Morale, Welfare and Recreation facilities for U.S. and Kuwaiti forces. At Al Asad Airbase in Iraq, the unit stood up housing and shower facilities for 800 allied forces, built a new water well, new USO facility, Post Exchange, larger dining facility and expanded base defense. Marines, Soldiers and Danish forces lived in tents, but after the work of the 1023rd, they had new and improved amenities and 2-person rooms.

The reunion between Staff Sgt. Chad Lawless and his wife, Angela, of Swartz, La., was particularly special as Chad met his 6-month old son, Levi, in person for the first time.

Angela said the day Chad left was one of the hardest days of her life, but her other two children, Lily, 4 and Luke, 2, kept her going and positive.

“I was so sad, just devastated; that was my best friend,” she said. “But there are no more tears. I’m just ecstatic. This is the best Christmas present ever.”

The 1023rd conducted mobilization training at Fort Bliss, Texas, before deploying overseas together.

This unit has participated in numerous response and recovery operations in this state, as well as other deployments overseas.