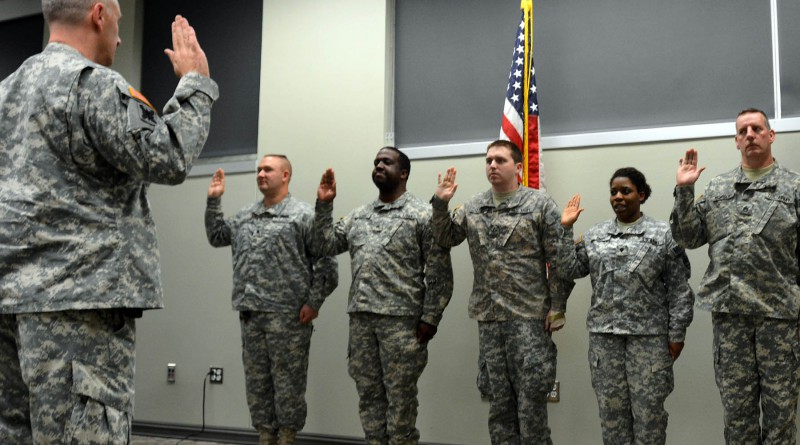 “We need Soldiers that are experienced and knowledgeable,” said Col. Cindy H. Haygood, 139th Regional Support Group commander. “By reenlisting, the experience and knowledge is already in place. We know serving your country is a tremendous sacrifice and we are truly grateful and appreciative.”

The event allowed Soldiers who were nearing the end of their contracts to discuss their careers with leaders, ask questions, and resolve issues that may have prevented them from continuing to serve.

“Our challenge as senior leaders is to keep the Soldiers that want to remain,” said Lt Col. Richard Douget, 773rd Military Police Battalion commander. “We need to meet with each and every one of them to find out what objections or questions they might have as part of the reenlistment process.”

“By reenlisting, you gain experiences that are built upon your time with us,” said Maj. Gen. Stephen C. Dabadie, LANG assistant adjutant general. “We thank you for choosing to stay with the family. Your 20 years will go by quick.”

Pfc. Cheryl N. Roy, from Lafayette, was one of the Soldiers who reenlisted.

“Wearing this uniform isn’t about a job or paycheck,” she said. “It is a way of life and a lifestyle. By staying in longer I will get more life lessons that I can apply to my everyday life.”

Roy sees herself as an important role model for female enlisted Soldiers.

“The military needs more females and by reenlisting I can mentor more females,” she added. “That is far more rewarding than any incentive. If there is something you want, go for it. The Louisiana National Guard makes that possible and I am thankful for the opportunity.”
Louisiana National Guard 773rd Military Police Battalion Reenlistments:
Carville