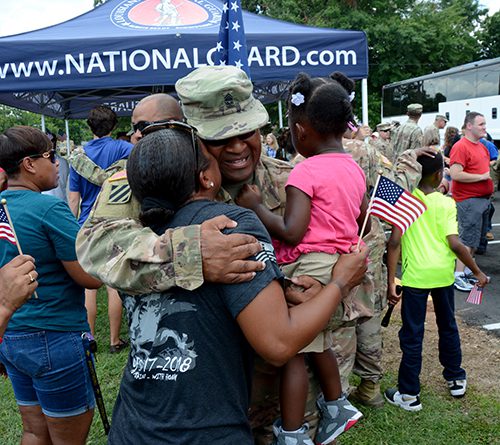 The approximately 70 members of the 165th Headquarters and Headquarters Company, 139th Regional Support Group, stepped off buses at the battalion’s armory in Bossier City shortly after noon Saturday to the open arms of their loved ones. The unit spent nine months in Afghanistan where they provided logistical operations support to coalition forces there.

Also on hand to greet the returning Soldiers was Maj. Gen. Glenn H. Curtis, adjutant general of the Louisiana National Guard. While waiting for the buses to arrive, Curtis shared some thoughts on bringing the troops home. “We bring our Soldiers home safely, return them to their families and let them get back to their normal lives after they’ve done some tough duty in places like Afghanistan which is where the 165th has been,” said Curtis, while waiting with the families.

“I tell the families all the time that they have the toughest job … they have to pick up the slack while that Soldier is deployed; taking the kids to ball games, paying the bills, keeping the house together.”

“Him being there without me, I feel like even though he’s my big brother, I feel like I should be there to watch his back and protect him, even though I know he’s got an excellent support group around him over there,” said Levesque.

Friends and family of another returning Soldier, Command Sgt. Maj. Donald G. Lavalais, were also excitedly waiting. His mother, Gloria L. Lavalais, shared how her family has stayed supportive during his two deployments.

“He’s my youngest son and it was pretty hard, but you know through prayers and with God I knew he was going to be ok … He [God] brought him there and he brought him back,” Lavalais’ mother said.

Lavalais’ fiancé Katasha Cherry, is especially excited as she said they are to be married in 45 days.

“I can’t say that I really worried a lot. I trust him, his leadership. I just want him to hurry up and come on back home,” said Cherry, who is also a Louisiana Soldier with one prior overseas deployment.

Units of the 165th CSSB have provided support for overseas combat missions in Operation Desert Storm and Operations Enduring Freedom and Iraqi Freedom. Domestically, the 165th plays an Master Sergeant Paul Meeker retires August 20 after having served in the Louisiana National Guard for more than 29 years. He has written countless stories for the Guard for the last 11 years from Guantanamo Bay, to all-hazards response and everything in between. We thank Paul for telling the Guard story and wish him well on his next adventure.