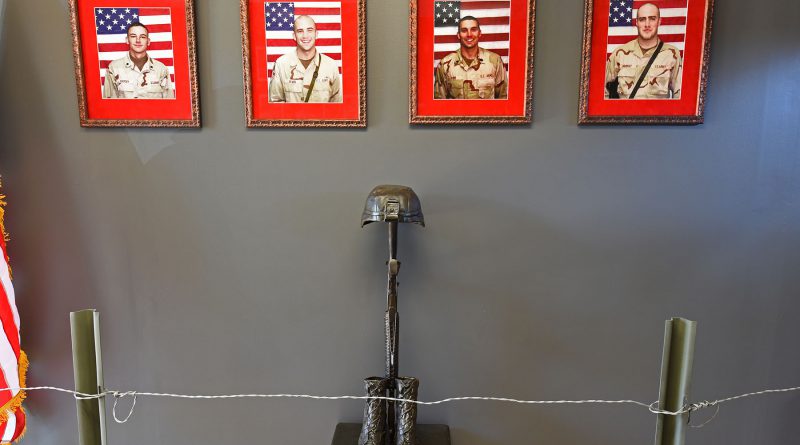 The four Soldiers were among the 36 that paid the ultimate sacrifice during the 256th’s 2004-2005 deployment to Iraq. During the time of the deployment, the unit was designated as B Company, 1088th Engineer Battalion.

“The camaraderie and esprit de corps that we had made this unit a true family,” said retired 1st Lt. Jeff Adams, who was in the unit during their deployment and lost his left leg in an IED strike. “This is a day of remembrance, but also of celebration. They did what they did so we could have days like this.”

The New Roads Lion’s Club, Pointe Coupee Sheriff’s Department and Pointe Coupee community leaders raised all of the money to have the statue made and chose the armory as the place where the memorial would be displayed.

The 160-pound, roughly four-foot-tall bronze Soldier’s Cross statue stands in the entryway of the armory with photos of the four Guardsmen directly behind it.

“This is a reminder that the National Guard truly is about communities. It is not just about the Soldiers in uniforms or the family members who support us,” said Maj. William Saint, commander of the 769th. “It’s about the entire network of volunteers, our neighbors and communities that support and build the strength of the National Guard.”

“This memorial would not have been possible had it not been for this community,” said Saint.

Family and friends of the fallen were also present for the unveiling. When the red curtain covering the memorial was drawn back, family members shared tears and hugs with one another.

“It means a lot to us that he will always be connected [to the unit],” said Krotz Springs firefighter Webster Reed, Staff Sgt. Reed’s father. “Even to Jon’s son, who never knew his dad because he was eight months old when it happened, knowing that they had the camaraderie for some [attendees] to travel from several states to remember him means a lot to all of us.”

“This band is for Sgt. Ramsey,” said Lt. Col. John Greg St. Romain, referring to the silver memorial bracelet on his right wrist. St. Romain commanded the unit during the 2004 deployment and said that he has a bracelet for each of the four Soldiers that he served with there. He said that he wears a different one every week. “It’s my way to connect to those Soldiers, as they did so much for me as a le ader during that time.”

“I’ve been in the unit for seven years, and Mr. [Webster] Reed is a volunteer at the fire department I’ve worked at for the past six years,” said Spc. Joseph Ashcraft, a New Roads resident currently in the unit. “I may not have known them personally, but they’re still ours. Once in our ranks, forever in our hearts. They’re not gone, and they definitely won’t be forgotten.”

1st Lt. Michael Switzer, a Walker native, enlisted as an Iron Horse in 1997 and deployed with them in 2004 as a squad leader. Reed was his platoon sergeant then. Now the company commander, Switzer said that since he took command, one of his main priorities was to see the dream of a memorial to his fallen battle buddies come to fruition.

“First in foremost, this is for the Gold Star Families and the sacrifice that they made,” said Switzer. “I wanted the statue and the photos to be in a place where the Guardsmen in the unit could see them and get a sense of the heritage and history of the unit.”

Aside from the year-long deployment, the unit also supported several stateside missions, including the recovery from Hurricanes Katrina and Rita, the Deepwater Horizon oil spill, and the August 2016 flooding.