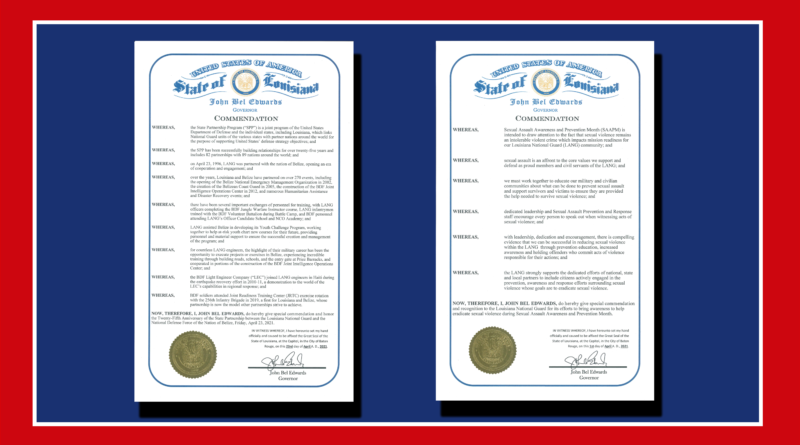 WHEREAS, the State Partnership Program (“SPP”) is a joint program of the United States
Department of Defense and the individual states, including Louisiana, which links
National Guard units of the various states with partner nations around the world for
the purpose of supporting United States’ defense strategy objectives; and

WHEREAS, the SPP has been successfully building relationships for over twenty-five years and
includes 82 partnerships with 89 nations around the world; and

WHEREAS, on April 23, 1996, LANG was partnered with the nation of Belize, opening an era
of cooperation and engagement; and

WHEREAS, over the years, Louisiana and Belize have partnered on over 270 events, including
the opening of the Belize National Emergency Management Organization in 2002,
the creation of the Belizean Coast Guard in 2005, the construction of the BDF Joint
Intelligence Operations Center in 2012, and numerous Humanitarian Assistance
and Disaster Recovery events; and

WHEREAS, there have been several important exchanges of personnel for training, with LANG
officers completing the BDF Jungle Warfare Instructor course, LANG infantrymen
trained with the BDF Volunteer Battalion during Battle Camp, and BDF personnel
attending LANG’s Officer Candidate School and NCO Academy; and

WHEREAS, LANG assisted Belize in developing its Youth Challenge Program, working
together to help at-risk youth chart new courses for their future, providing
personnel and material support to ensure the successful creation and management
of the program; and

WHEREAS, for countless LANG engineers, the highlight of their military career has been the
opportunity to execute projects or exercises in Belize, experiencing incredible
training through building roads, schools, and the entry gate at Price Barracks, and
cooperated in portions of the construction of the BDF Joint Intelligence Operations
Center; and

WHEREAS, the BDF Light Engineer Company (“LEC”) joined LANG engineers in Haiti during
the earthquake recovery effort in 201 0-11, a demonstration to the world of the LEC’s capabilities in regional response; and

WHEREAS, BDF soldiers attended Joint Readiness Training Center (JRTC) exercise rotation with the 256th Infantry Brigade in 2019, a first for Louisiana and Belize, whose partnership is now the model other partnerships strive to achieve.

NOW, THEREFORE, I, JOHN BEL EDWARDS, do hereby give special commendation and honor the Twenty-Fifth Anniversary of the State Partnership between the Louisiana National Guard and the National Defense Force of the Nation of Belize, Friday, April23 , 2021.

WHEREAS, Sexual Assault Awareness and Prevention Month (SAAPM) is intended to draw attention to the fact that sexual violence remains an intolerable violent crime which impacts mission readiness for our Louisiana National Guard (LANG) community; and

WHEREAS, sexual assault is an affront to the core values we support and defend as proud members and civil servants of the LANG; and

WHEREAS, we must work together to educate our military and civilian communities about what can be done to prevent sexual assault and support survivors and victims to ensure they are provided the help needed to survive sexual violence; and

WHEREAS, dedicated leadership and Sexual Assault Prevention and Response staff encourage every person to speak out when witnessing acts of sexual violence; and

WHEREAS, with leadership, dedication and encouragement, there is compelling evidence that we can be successful in reducing sexual violence within the LANG through prevention education, increased awareness and holding offenders who commit acts of violence responsible for their actions; and

WHEREAS, the LANG strongly supports the dedicated efforts of national, state and local partners to include citizens actively engaged in the prevention, awareness and response efforts surrounding sexual violence whose goals are to eradicate sexual violence.

NOW, THEREFORE, I, JOHN BEL EDWARDS, do hereby give special commendation and recognition to the Louisiana National Guard for its efforts to bring awareness to help eradicate sexual violence during Sexual Assault Awareness and Prevention Month.