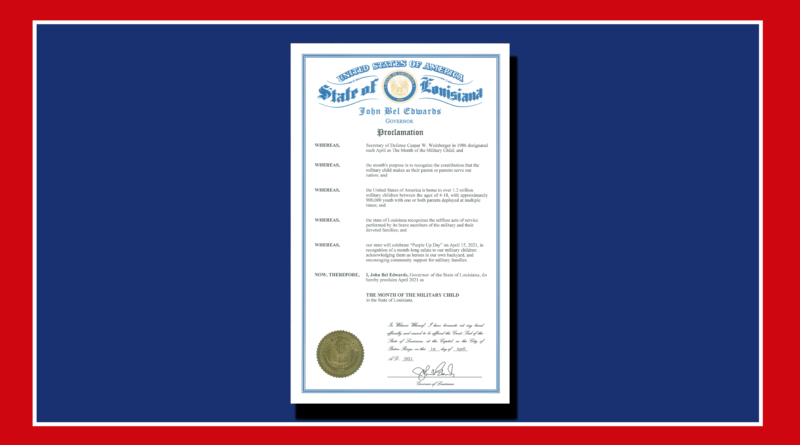 WHEREAS, Secretary of Defense Caspar W. Weinberger in 1986 designated
each April as The Month of the Military Child; and

WHEREAS, the month’s purpose is to recognize the contribution that the
military child makes as their parent or parents serve our
nation; and

WHEREAS, the United States of America is home to over 1.2 million
military children between the ages of 4-18, with approximately
900,000 youth with one or both parents deployed at multiple
times; and

WHEREAS, the state of Louisiana recognizes the selfless acts of service
performed by its brave members of the military and their
devoted families; and

WHEREAS, our state will celebrate “Purple Up Day” on April 15, 2021, in
recognition of a month-long salute to our military children
acknowledging them as heroes in our own backyard, and
encouraging community support for military families.

NOW, THEREFORE, I, John Bel Edwards, Governor of the State of Louisiana, do
hereby proclaim April 2021 as

THE MONTH OF THE MILITARY CHILD
in the State of Louisiana.