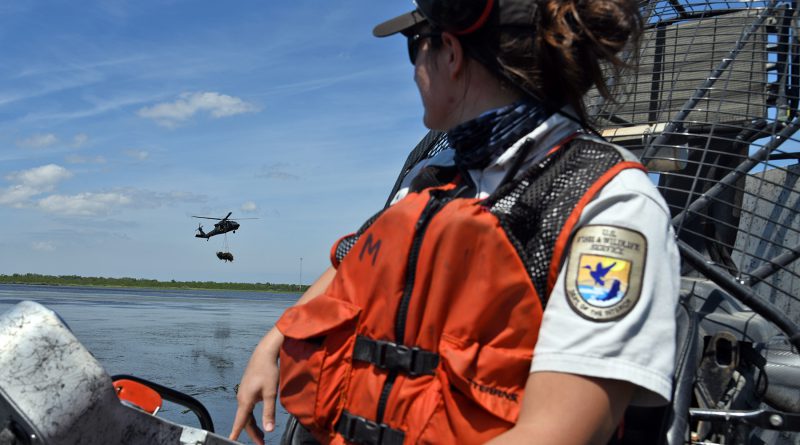 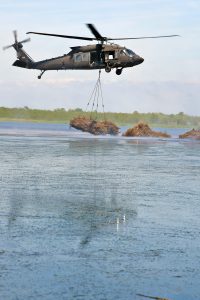 During the operation, LANG aviators hooked up and dropped bundles of recycled Christmas trees provided by Orleans Parish residents into key areas to rebuild marshland in Bayou Sauvage, which is the second largest urban wildlife refuge in the U.S. This process creates new marsh habitats by building structures that can support native marsh grasses, which traps and holds sediment, creating more land and stable environments for animals.

“Before we had the pleasure of working with the National Guard, we had to do this project manually. We would collect trees, put them in boats and bring them out to the sites to put in cribs that we built. It was a very labor intensive operation,” said Shelley Stiaes, refuge manager for Bayou Sauvage, Mandalay and Bayou Teche National Wildlife Refuges. “Now, it’s much easier. All we have to do is take out our airboats and take the slings off of the trees.”

The project has re-established hundreds of acres in the Bayou Sauvage NWR over the last 24 years. This year, the LANG and the U.S. Fish and Wildlife Service emplaced approximately 9,900 Christmas trees.

Stiaes said that in addition to creating a wildlife habitat, rebuilding eroded marshlands in the area is important because t 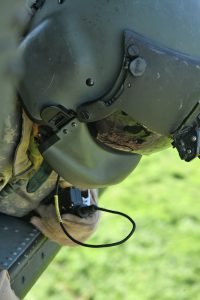 hey act as wave breaks that protect against New Orleans East flooding from storm surges during hurricanes. She also said that the operation would not be possible if not for the thousands of New Orleans residents who participate by donating their Christmas trees.

This year, the trees are being used to reconnect islands that were decimated during Hurricane Katrina after a levee 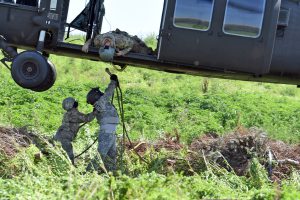 was compromised and allowed salt water from Lake Borgne to destroy much of the fresh water plants that held the sediment together.

“This is a working partnership that we’ve had for several years, and it benefits the city and the environment while getting us some much needed training hours for our pilots and crewmembers,” said Chief Warrant Officer 3 Gabriel Ruiz, the LANG officer-in-charge of the operation. “Sling-load training opportunities don’t come very often, so when we get an opportunity to train this way, there’s a lot of value to it.”

“I’m really glad I got to cross-train on something I wouldn’t normally do with my unit. Before today, I had never even ridden in a helicopter, so standing underneath one was scary at first,” said Pvt. 1st Class Mo’nysha Gibson, a supply and logistics specialist who helped with the operation. “I got over it because I have faith and trust in our pilots and crew. I knew we were in good hands.” 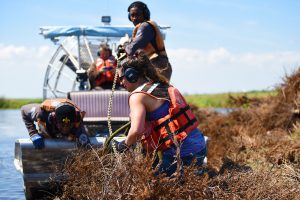 invaluable to developing those skills in a controlled environment so when the need arises during an emergency, flight crews are ready to quickly and efficiently complete their missions.