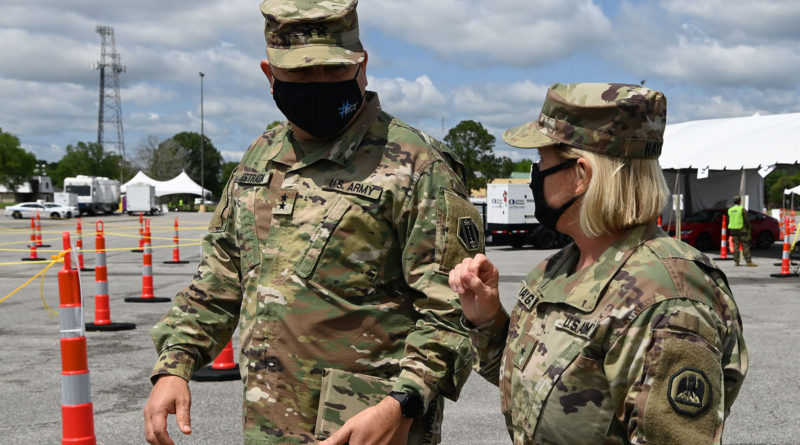 A dual-status commander is typically appointed in large, complex stateside missions or response efforts involving both Guard members in state, or Title 32, status and other service members in federal, or Title 10 status.

The Baton Rouge CVC is capable of administering approximately 3,000 shots in arms per day, or 21,000 doses per week. 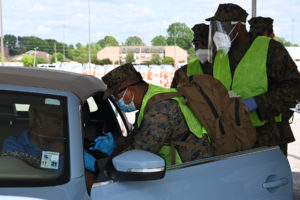 “The CVC is supported by local, state and federal partners, so we have a lot of support from great teammates,” said Haygood. “We worked with the Navy last year during the pandemic, and the caliber of professionalism that comes with these forces is amazing.”

At this CVC, located behind the Bon Carre Business Center, FEMA supports by providing vaccines, while the Department of Defense, in support of FEMA, has positioned 135 active-duty personnel from the Navy and Marine Corps to support the logistics, traffic control, and administration of shots.

Clay Rives, director of East Baton Rouge Mayor’s Office of Homeland Security and Emergency Preparedness, “The mayor is really excited about this opportunity, and it would not be possible without the support from the Louisiana National Guard, as well as the state partners,” said Kimble. “The organization piece through the National Guard to bring everything together has been spectacular.”

Haygood, who has commanded the LANG’s Task Force COVID since last August, is now able to command both National Guard and Active-Duty service members participating in COVID-19 operations, totaling more than 1,095. Rather than having entirely separate state and federal chains of command, the dual-status commander acts as both, streamlining response operations.

Michael Kimble, with the Baton Rouge Fire Department, serves as the incident commander under Haygood at the CVC. “The fire 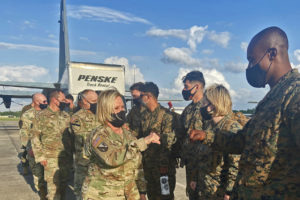 department brought in a team to help manage and bring all of the different groups, or agencies, together for one common goal,” said Kimble. “It has been great, and everything has been running smooth.”

Maj. Mike Griner serves as the officer in charge of the Navy and Marine Corps team, out of Camp Pendleton, California, assigned to the CVC. “General Haygood has been great and takes care of the team well. The local partners here have been key and ensure that we have the supplies and everything we need in order to run the site operations.”

In addition to the CVC site, there are 20 outreach vaccination events planned from April 23 – 30 to help reach some parts of the community not wanting to attend a large-scale operation.

“They are smaller in nature, ranging from only 50 to 400 shots, but we need to be in those areas in order to get EBR to the goal of 50% vaccinated,” said Haygood. “It’s going to take all hands on deck from my teams, as well as community influencers and leaders to reach that mark.”