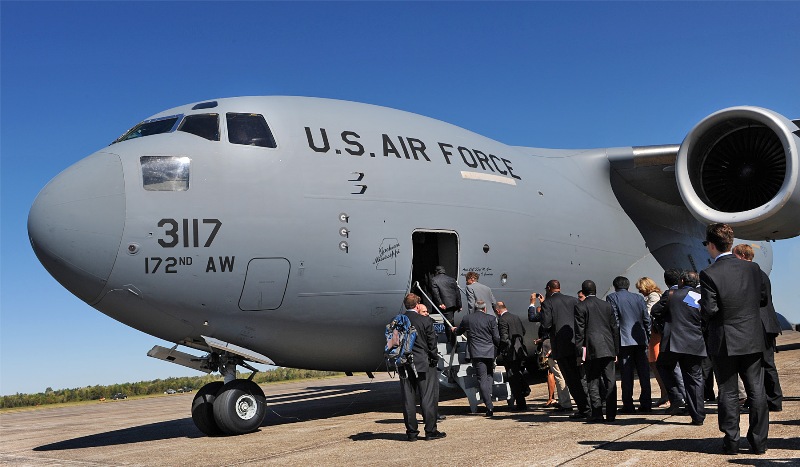 “This has been a wonderful experience and everything we hoped to get out of this trip,” said Mimi Reisner from the State Department. “New Orleans is a fantastic city and a true testament to the American spirit. The can-do attitude, the rich culture, music, architecture and cuisine make this a very fun city.”

The Experience America program gives foreign ambassadors a better understanding of the United States through a series of high level meetings, tours, and interactions with business, non-profit and civic leaders in American states and cities.

The diverse group of ambassadors boarded a C-17 Globemaster III provided by the 172nd Airlift Wing, Mississippi Air National Guard, for a flight over New Orleans East, Lake Borne and the coastline of Louisiana, Mississippi and Alabama.

“The C-17 ride was an interesting experience … being able to see the areas affected by the hurricane and the oil spill,” said Mr. Vice Skracic, ambassador of Croatia. “From what I have seen on this tour, there is a lot of work that has gone into getting the city more prepared in the event of something happening again.”

During the ambassadors’ orientation flight, the spouses were given a guided tour of an F-15 Eagle by Lt. Col. David “Pin” Slaydon, 122nd FS pilot, Master Sgt. Thomas Gates and Master Sgt. Bertrand Woods, both in the 159th Maintenance Squadron.

Following the flight, the ambassadors joined their spouses and the 159th Operations Group commander, Lt. Col. Shawn “Cuz” Coco, in the briefing room for a short video of the 159th Fighter Wing, highlighting the wing’s mission and accomplishments and the actions of National Guard members in leading various state and local government agencies in the disaster recoveries.

“The foreign ambassadors visit was a great success,” said Coco. “I described in detail the devastation left in the path of Hurricane Katrina, the areas affected by the Deepwater Horizon oil leak and the actions of Air National Guard members in leading various state and local government agencies in the disaster recoveries.”

Experience America is organized by the Diplomatic Partnerships Division of the Office of the Chief of Protocol, whose mission is to foster international goodwill and cultivate the relationship between the Diplomatic Corps and the people and institutions of the United States through an exchange of ideas, cultures and traditions.

The goal is to share the best of our nation with foreign officials and to foster mutually beneficial relationships between these officials and the American communities they visit.

“The people of New Orleans are very welcoming, the food was extraordinary, and the people have come together to rebuild this city,” said Mrs. Marliese Heimann-Ammon, wife of German Ambassador Mr. Peter Ammon. “I admire Americans in how they work together; some people we met yesterday were from New York, and they said they moved here to help rebuild this city. That is just amazing to me.”