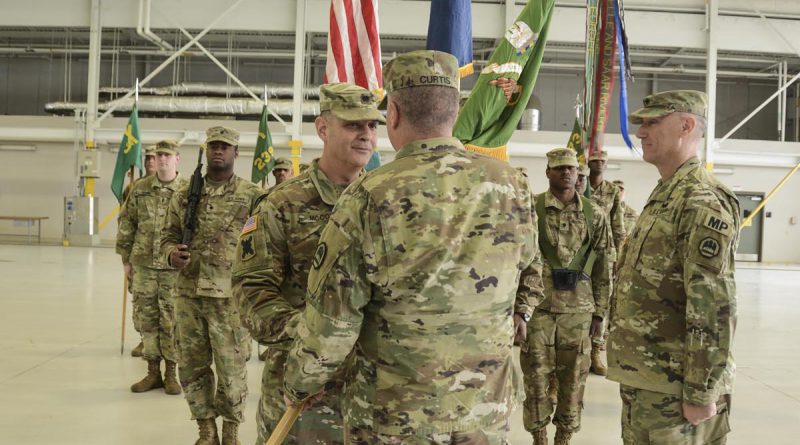 “I want to thank Maj. Gen. Curtis for giving me this opportunity to serve,” said Douget. “It has truly been a lifetime experience.” 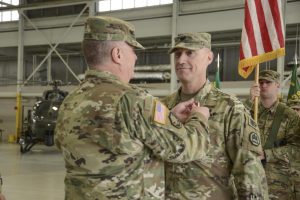 Douget, a 25-year veteran, enlisted in the United States Army as an infantryman in 1988. He was promoted to the rank of second lieutenant after a direct commission in 2000.

Douget served in a variety of command and staff assignments from platoon to brigade level to include: company team leader, battalion battle captain and joint force headquarters operations mobilization readiness officer. Douget has held his assignment as commander of the 773rd since August 2015 and is scheduled to attend the Navy War College in February.

“Richard, you are a professional officer who has brought a wealth of knowledge and experience to our organization,” said Maj. Gen. Glenn Curtis, adjutant general of the LANG. “You are invaluable as a leader and have done a great job as commander of the 773rd.”

“Maj. Gen. Curtis, thank you for having the confidence to afford me the opportunity to command this battalion. Words can’t describe my gratitude and appreciation of such an honor,” said McCoy. “Lt. Col. Douget, thank you for your support with a smooth transition, the leadership and care you have given these Soldiers and their families. Your time here has left a legacy that I can only hope to emulate as we move forward and continue to strive to raise the bar even more.”

McCoy enlisted in the LANG as a machinist in 1989. He became a second lieutenant 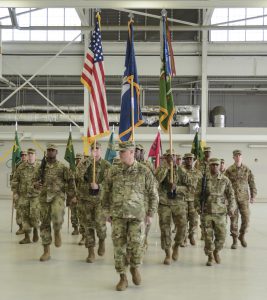 through a direct commission in 1999. He has served as the surface maintenance manager for Joint Force Headquarters since May 2015, and is currently the deputy director of the joint chief of staff – logistics for the LANG JFHQ.

“To the Soldiers of the 773rd MP Battalion, I know of no other place I would rather be than here as part of this exceptional battalion,” said McCoy. “I am honored and yet humbled to be your commander.”

McCoy has deployed in support of Desert Storm, Operation Iraqi Freedom (III) and Operation New Dawn, as well as, Operation New Horizons in Belize. He has also supported several stateside missions to include: Hurricanes Katrina, Rita and Isaac and the August Severe Weather in 2016.

He earned a Bachelor of Arts in Sociology from Northwestern State University. He is a reserve deputy for the Grant Parish Sheriff’s office.

“Mark, has held a number of key leadership positions, and is more than qualified for this command,” said Curtis. “I am confident that he will keep the 773rd on their path of excellence.”

McCoy is married to the former Deanna Beaubouef, of Effie. They have four children: Megan, Kristen, Taylor and Mark II.