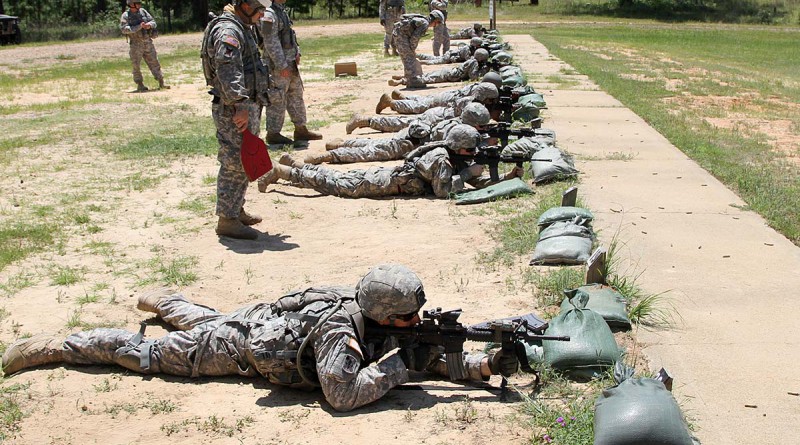 NEW ORLEANS – Units of the Louisiana National Guard’s 256th Infantry Brigade Combat Team from across the state gathered to work together during annual training at Fort Polk, May 31 – June 13.

The training gave the troops an extended opportunity to refine their military skill sets, in and out of the field. This allowed the Soldiers to engage in real world simulations on a large scope of operations, preparing them for any potential state or federal deployment.

“It’s always an honor to train with the Soldiers of the 256th IBCT,” said Col. Damian K. Waddell, commander of the 256th. “Once again, they’ve demonstrated why they’re one of the finest units in the entire National Guard and the Army.”

On drill weekends throughout the year, the various companies within the 256th work with their own assets at their armories. Annual training periods bring brigade personnel from across the state to a central location in order to work together to achieve their mission.

“Having the brigade, as a whole, doing AT together is very necessary,” said Command Sgt. Maj. Patrick L. Sandel, senior enlisted leader of the 256th. “Our goal was to build upon the camaraderie and trust between the units, and I believe we’ve achieved that goal.”

Waddell commented that this AT was the first time that the brigade has trained at Fort Polk for quite some time. In recent years, the unit has traveled to Camp Shelby, Mississippi, for training.

“This AT gave us an opportunity to work with our active duty partners from the 3rd Infantry Brigade Combat Team, 10th Mountain Division,” Waddell said.

The 256th IBCT and 3/10th Mountain, based at Fort Polk, are paired through the Army’s Total Force Partnership Program, designed to allow the units to find shared training opportunities and trade lessons learned, as well as promote informal leader development.

“I wanted to give our brigade Soldiers the opportunity to train on another installations. Fort Polk has a platoon live fire training area that we had access to for training,” Waddell added. “It’s essential for us to constantly raise the bar to new heights. Having the Soldiers in a new environment gives them new challenges to face and overcome.”

“Training with everyone has been really great,” said Sgt. Bret M. Shearer, a squad leader with A Company, 3rd Battalion, 156th Infantry Regiment. “Everyone works together to complete the mission. If one company is training, another company runs the range and then we switch.”

“It’s important for our cooks be out here,” said Capt. Jessica Plummer, commander of G Company, 199th Brigade Support Battalion, attached to 1st Battalion, 141st Field Artillery Regiment. “MREs are great for sustaining energy, but sometimes a hot meal after training is a little bit better. They’re doing an incredible job. They’ve been here since before day one and they’ll be some of the last ones out.”

“We have a great team at the 256th,” remarked Waddell. “It just goes to show you, when all those elements are working together, you can accomplish great things.”