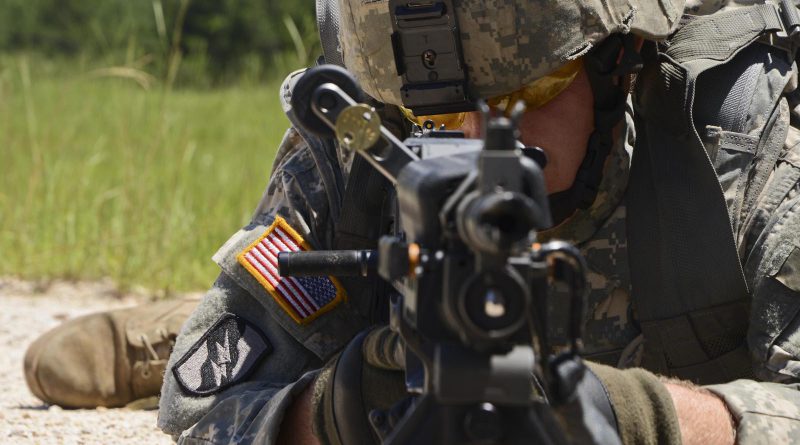 AT gave units the opportunity to increase the overall skill and readiness of the brigade by completing tasks and drills such as squad movements, combat water survival training and mortar live fire. This year the 256th also fielded new weapons systems. C Troop, 2-108th conducted combat water survival training (CWST) and Zodiac boat training at Fort Polk. CWST taught Soldiers how to use their uniforms as floatation devices and different swimming techniques. Soldiers also learned how to move in the water tactically with their weapon and how to perform water rescues.

“Training like this keeps us ready at all times,” 1st Lt. Joe Jackson of Monroe, with C Troop, 2-108th said. “We never know when a disaster will happen, but when it does we will be ready.”

The 2-108th use the Zodiac boats to conduct search and rescue missions in an emergency, most recently during the historic flood in Louisiana in March, or during reconnaissance missions. Troopers trained to increase their proficiency using the boats and on what to do if the boat capsizes.

“I love being on the water in the boats,” said Spc. David Fale of Shreveport, with C Troop. “The best way to put it the boats are my baby, and I just have a lot of fun on the water.”

The 2-108th and 3-156th each had a Soldier from the British Army embed with them as part of the Military Reserve Exchange Program. The MREP is a Department of Defense program and is meant to provide National Guard and Reserve Soldiers the opportunity to train with similar units and enhance Soldiers’ ability to work and communicate with each other. Some of the countries that participate in this program are the United Kingdom, United States and Germany.

“It’s been brilliant. The group that I’ve been attached to has looked out for me and made me feel like a part of the family,” Sgt. Neil Thornton, 3rd Battalion Princess of Wales Royal Regiment said. “They’ve gone above and beyond to let me see what the battalion is capable of. I was in the regular service for 22 years and never fired an anti-tank weapon, I’m here for a week and I’m getting rounds down range.”

As part of MREP, the 256th will send two Soldiers to the United Kingdom to attend annual training with units there. Cpl. David Myhowycz of the 4th Battalion, Yorkshire Regiment, has completed exchanges with several countries.

“It is massively important because it is getting to know people, and operating in different environments, different cultures. You’re not always going to work with predominantly English speaking units. It’s expanding your adaptability to a situation and environment,” said Myhowycz.

The 769th Brigade Engineer Battalion conducted its first AT with the 256th IBCT since joining the brigade by conducting demolition training and a chemical, biological, radiological, nuclear, explosives (CBRNE) exercise. During the demolition training, the combat engineers set charges that could collapse a bridge or road in the case of an enemy attack. In the CBRNE exercise, the Soldiers cleared a building that was suspected of being used as a lab with possible chemical agents present. The Soldiers went through the process of clearing the building and then ran tests to see what, if any chemical agents were present.

Units in the brigade also conducted mortar live fire exercises on the range. This gave Soldiers the opportunity to fire 120mm mortars at the range, as well as the javelin, which is a portable anti-tank missile.

Soldiers of C Battery, 1-141 conducted training on the six new m777A2 Howitzers the battalion recently received. The m777A2 is a heavy artillery towed cannon and is the successor of the m198.

“This is digital, and it’s a lot different than what I’m used to,” Staff Sgt. Daniel Cannon of Metairie, a gun chief with C Battery, 1-141 said. “I have to learn a new piece of equipment, which means relearning the ammo and powder for it. It’s a challenge and I like it.”

A and B Battery, 1-141 conducted live fire exercises on the m119A3 Howitzers. The m119A3 is a digital system that simplifies Soldiers receiving fire commands and decreases the amount of time needed to return fire. Soldiers spent the training familiarizing themselves with the fire control system, which is how the fire commands are received.

“The A3 is actually going to improve the accuracy of the Howitzer and the rounds down range. It’ll give you more probability of steel on target over the old ways,” said Sgt. Miguel Juarez, of Granbury, Texas, a gun chief on the m119 A3 with A Battery, 1-141. “It’s kind of hard to pick your rounds up and make them accurate; whereas in the digital world, I can get accurate up to .1 mils.”

Col. Keith Waddell, commander of the 256th IBCT said, “The training was a tremendous success. The Soldiers trained hard and our unit readiness continued to grow. I’m proud of the dedication and hard work our Soldiers put into the training. The next step is to continue to build upon our readiness and be ready for when our Soldiers have to execute their federal or state missions.”