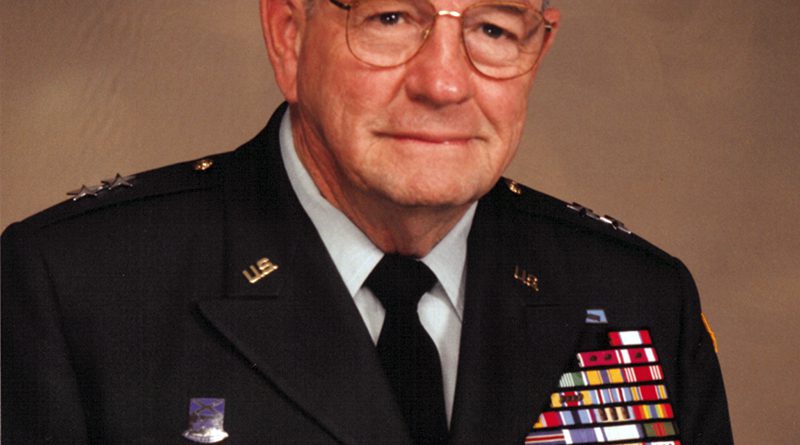 Stroud served as the adjutant general of Louisiana for 17 and a half years, making him the second longest serving top leader of the LANG. He served under four governors and his career spanned more than five decades.

During his tenure, his vision set not only the LANG, but the National Guard as a whole on a path that includes programs still in use today such as: the Youth Challenge Program that is now in more than 37 states, the State Partnership Program with more than 76 partner countries and the Active Guard Reserve program for full-time manning for the Guard and Reserves. “Many of the things we consider a success in the Guard today [can be] attributed to General Stroud. I was one of the folks that had the opportunity to benefit from General Stroud’s vision years ago when we started going to Central America in the 1980s. I had the opportunity as a young captain … to deploy outside the country and go on a humanitarian mission,” said Grass.

Grass spoke of later meeting Stroud, whom he called a “tremendous southern gentleman”, at Jackson Barracks in New Orleans more than 20 years ago to ask for Louisiana’s support for an another overseas deployment training mission.

“He said, ‘We’ll do it.’ He was a tremendous visionary … he just set us on the path for so many things,” said Grass.

In 1977, Stroud was selected to direct a Department of the Army study on fulltime training and administration for the Guard and Reserve. This was known as the “Stroud Study” and was accepted by the Department of the Army as a guideline for requirements of the National Guard and Army Reserve for full-time manning programs. This study was the basis for launching the AGR program. than any other state, in support of Operation Desert Storm. The Guard received high praise for their efforts during Desert Storm and for their response to Hurricane Andrew in 1991.

In 1997, the Ansel M. Stroud Jr. History and Weapons Museum at Jackson Barracks in New Orleans was dedicated to his contributions to the organization and preservation of LANG history.

“His influence on the National Guard during the time he served was tremendous. The generations that have followed have received great benefit from his wisdom and guidance and where he put the National Guard as a whole but also the United States Army and United States Air Force,” said Maj. Gen. Glenn H. Curtis, the current adjutant general of the LANG. “He is a legend among legends, as far as leaders and general officers go.”

Stroud was born April 5, 1927, in Shreveport. He graduated from Belcher High School and went on to get a Bachelor of Science in Liberal Arts from the University of the State of New York. He was married to his wife, Jane Stroud, for 21 years. He leaves behind four sons, five stepchildren and seven grandchildren.