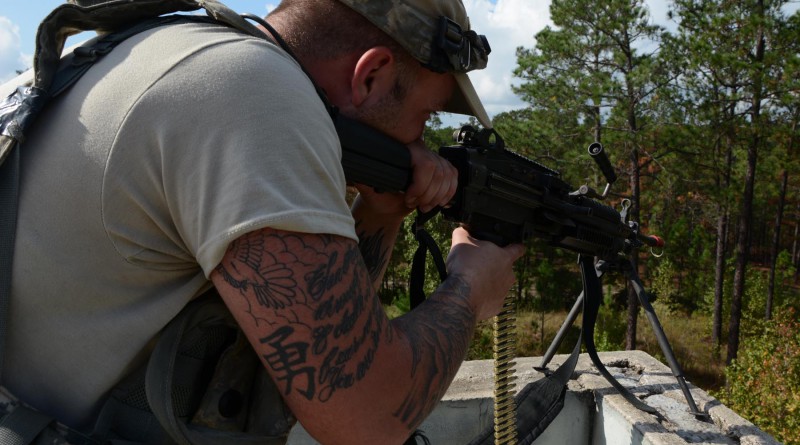 The Louisiana MPs played the opposition force against the paratroopers from the 1st Brigade Combat Team, 82nd Airborne Division from Fort Bragg, North Carolina because the 82nd will assume Global Response Force duties in December. The GRF is capable of deploying a brigade-sized force anywhere in the world within 96 hours.

Task Force Panther was made up of MPs from communities across Louisiana in Pineville, Lafayette and Minden. Their mission was to disrupt the “enemy’s” initial foothold and control their two villages as well as key locations in the training area.

“Our job is to help train and make sure that our American forces are ready when they get that call, and prepared to fight whatever fight,” said Capt. Laura Reiber, of Baton Rouge, commander of Task Force Panther.

The 773rd has done two-week training rotations in Germany and Belize, but this is their first rotation at JRTC. The training at JRTC allowed Soldiers to train not just on one part of their job, but allowed hands-on experience of their duties in a deployed situation.

“We’re getting to actually perform our military occupational specialty, and not just one aspect of it but the entire spectrum,” said Reiber. “We’re running route-reconnaissance and air-security missions, we’re doing convoy security, dismounted patrols, and we’re going to clear rooms and seize buildings. There are a lot of young Soldiers who’ve never done this before. JRTC is the closest thing you can get to actual combat, so it’s been great.”

JRTC allowed the Soldiers who haven’t been in a combat situation to see the equipment and capabilities that the Army has to offer. The hands on training at JRTC gave the battalion a chance to test the unit’s standard operating procedures and its tactics, techniques and procedures.

“It definitely allows us to see the interpersonal communications and how people react. We’re not training the entire time with our one weekend a month and two weeks a year, but here it’s a consistent training schedule that allows us to have that deployment type experience for those of us that haven’t deployed,” said Staff Sgt. Weston Marriott, with the 39th Military Police Company.

“A lot of these guys were new to me and new to the other Soldiers, but we’ve meshed real well. I couldn’t ask for a better crew. These guys are motivated and hardworking,” said Sgt. 1st Class Naquin Barrett, of Luling, a platoon sergeant with 2228th MP Company.