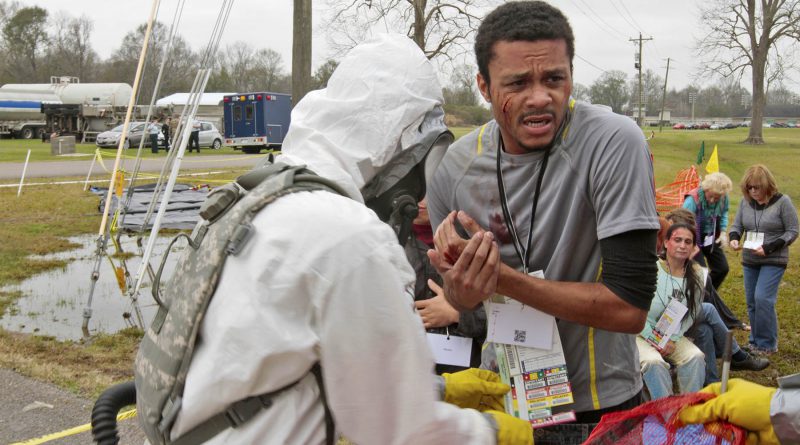 “This is a special unit specializing in homeland security dealing with hazardous material and weapons of mass destruction,” said Lt. Col. Jonathan Ballard, CERFP commander. “They do decontamination, medical triage, search and extraction, and fatality recovery.”

The CERFP trains continuously in order to remain proficient and ready to deploy within six hours to any location in FEMA Region 6, which includes Arkansas, Louisiana, New Mexico, Oklahoma and Texas.

“The evaluations are normally held every 24 to 36 months,” said Ballard. “But this unit trains together once a quarter every training year to maintain proficiency.”

“These Soldiers and Airmen are especially useful to Louisiana due to its unique location and the amount of gas and chemical plants within the state,” said Master Sgt. Carl Griffin, CERFP operations chief. “They bring a larger set of capabilities to the state to assist local emergency operations centers, sheriff’s offices and fire departments during major events.” Louisiana’s CERFP was stood up in November 2010. Since then, the unit has provided command and control support in response to Hurricane Isaac in August 2012 and assisted the 62nd Civil Support Team in New Orleans during Mardi Gras in 2016. This year, members of the CERFP will again assist the 62nd during the NBA All-Star game and Mardi Gras in New Orleans.

CERFP is a DoD directive aimed at building up homeland defense with National Guard resources.