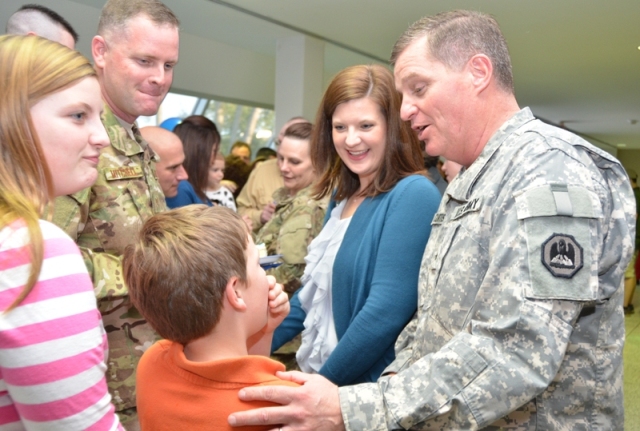 HAMMOND, La. – The Louisiana National Guard, family and friends bid an emotional farewell to approximately 30 Airmen of the 236th Combat Communications Squadron during a deployment ceremony held at Southeastern Louisiana University’s Student Union Theater in Hammond, Dec. 14.
The squadron is comprised of 120 Airmen from the Louisiana Air National Guard’s 159th Fighter Wing. Approximately 30 of those Air Guardsmen are deploying with the 236th CBCS in support of Operation Enduring Freedom in Afghanistan.

While deployed, they will be part of the 838th Air Expeditionary Advisory Group. They will utilize their expertise and versatility in the tactical communications arena to provide voice and data services to a variety of customers in the Afghanistan Theater of Operations.

Brig. Gen. Glenn H. Curtis, adjutant general of the Louisiana National Guard, was in attendance and reassured families that their Airmen were well trained and that he was confident they would do their families and the nation proud.

“Remember that you are in this together,” said Curtis. “Get the mission accomplished and come home safely to your families and friends.”

“I have full faith and confidence in my Airmen and am looking forward to this deployment because this mission is a wheelhouse of what we do here at home,” said Lt. Col. Timothy Jeandron, deployment commander.

The LaPlace native said he welcomes this unique commander challenge as he will be in charge of both active duty and Guard forces while on an Army base that is known for its high operational tempo.

“You and your families are my highest priority as a Wing Commander,” said Col. Roy V. Qualls, 159th Fighter Wing commander. “Give us the responsibility and honor of taking care of you while you are deployed.”

“This is a very capable group, and I’m sure they’re going to make an outstanding impression,” said Maj. Harry “Chip” Trosclair Jr., 236th Combat Communications Squadron detachment commander and master of ceremonies for the ceremony.

Bordelon, who is affectionately referred to as “Jukebox” by his fellow Airmen because he is always singing and making them laugh, made a name for himself and the Louisiana Air National Guard when he earned a position on the 2010 All-Air Force Soccer Team. The LaPlace native was the first Louisiana National Guard member to earn a spot on the prestigious team and was also the youngest and lowest-ranking player on the team that year.

“We have the right people for this mission,” said Chief Master Sgt. Brent Simon, deployment non-commissioned officer in charge.

“Lt. Col. Jeandron and Chief Master Sgt. Simon are excellent leaders and the Airmen under them are all top notch. With this team’s level of training and experience, they will accomplish some truly incredible things in the area of communications and will undoubtedly set the standard at their deployed location,” said Trosclair.

The National Guard, the oldest component of the United States Armed Forces celebrated its 375th birthday on Dec. 13, 2011. The 236th CBCS Airmen proudly continue in this legacy of service both at their state and the national level as they leave their families this holiday season in order to defend the United States and its interests.