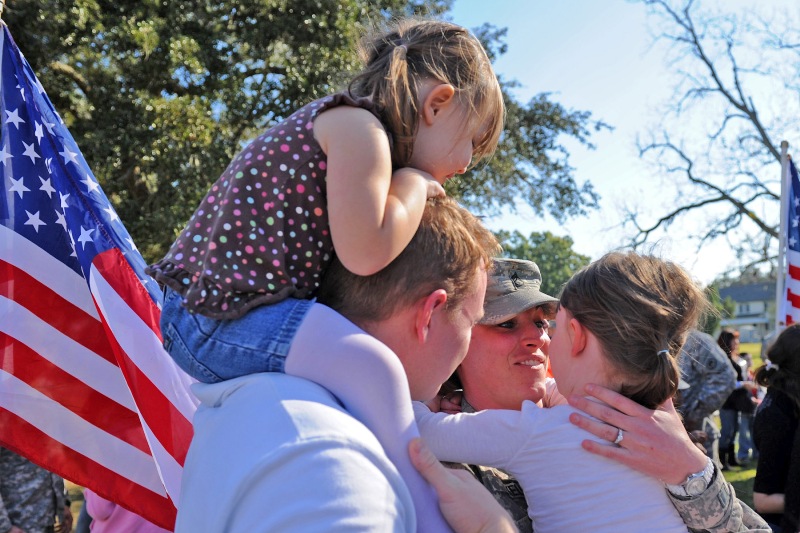 “This is a great day for these Soldiers, their families, and our state,” said Governor Bobby Jindal, who greeted the Soldiers as they stepped off the bus. “For one year, these brave men and women served our country with honor and distinction in Afghanistan. Many mothers and fathers have been away from their families for a long time – and it’s a great day for their families who will get to enjoy Thanksgiving with their loved ones. Our thoughts and prayers are with the Soldiers who won’t be home for the holidays, and I look forward to the day when we welcome them home to Louisiana.”

Headquartered in Carville, the 415th was deployed to conduct analysis and counterintelligence operations throughout Afghanistan that were essential to counter-insurgency operations.

“Louisiana National Guard Soldiers and Airmen are the true credit for our Guard’s ability to respond to the needs of our nation,” said Brig. Gen. Glenn Curtis, adjutant general of the LANG.  “The Soldiers of the 415th Military Intelligence Battalion performed superbly.  Their high level of training and professionalism allowed them to accomplish every mission assigned.

The 415th previously deployed as a battalion in support of Operation Iraqi Freedom for the tactical human intelligence mission.  Human intelligence teams supported units across the Iraq theater of operations with distinction and earned the Meritorious Unit Commendation.

“It is always tough, but the goodbyes weren’t as painful this time,” said Staff Sgt. Heather Daunis, wife of returning Guardsman Staff Sgt. Geoffrey Daunis, speaking about previous deployments for both members of their dual-military family. “I am very excited for our two-year-old son; he knows his daddy is coming home, and he is thrilled!”

The 415th has participated in many emergency operations/recovery operations for the state of Louisiana, including Hurricanes Katrina, Rita, Gustav and Ike and provided support to Task Force Gator and the NOPD. Many members of the 415th participated in the Deepwater Horizon Oil Spill response effort.

“Their hard work and dedication has proven time and again to be a critical element of our national defense,” said Curtis.