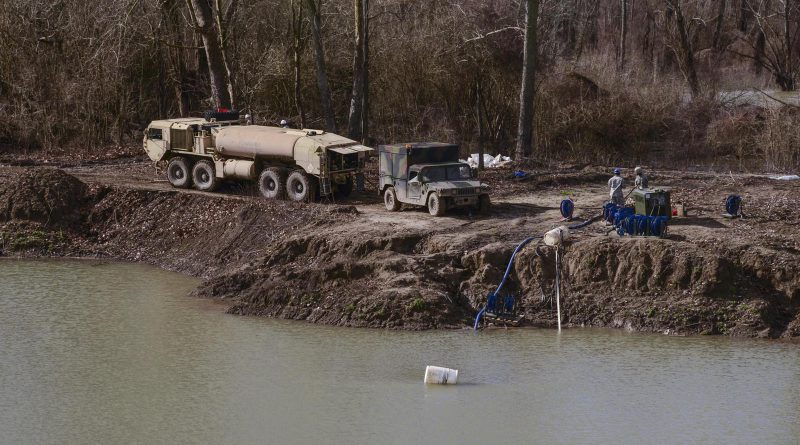 PINEVILLE, La. – The Louisiana National Guard began repairing a levee breach at the Louisiana State Penitentiary in Angola, as one of several Innovative Readiness Training and Overseas Deployment Training projects planned throughout the year, Jan. 15.

IRT projects are used to build and strengthen partnerships between local communities and the Guard. According to Capt. Jerry Rodriguez, IRT and ODT manager for LANG, these missions show the Guard is capable of more than emergency response.

“Our Guardsmen receive valuable real world training in their job fields,” said Rodriguez. “The flip side of things is that the communities receive the finished projects and know that the Guard is there to help and be there for the community.”

The Guard is set to work on several IRT projects which include adding additional sleeping quarters to the Caddo Parish Fire Station, a soccer field and parking lot at Louisiana State University – Alexandria and a catfish research pond rehabilitation at Grambling State University. Annual Training projects include installing culverts in Farmerville, creating a practice field for the band at Louisiana College and adding a bathroom at the park in Cheneyville.

On the Angola project, 18 engineers from the 205th Engineer Battalion, headquartered in Bogalusa, will remove the water from inside the levee where the breach is with the Hydraulic, Electric, Pneumatic, Petroleum Operated Equipment (HEPPOE). The engineers will also use bulldozers, graders, hydraulic excavators, 10-ton dump trucks, scoop loader, a scraper and a compactor. “We are currently using the HEPPOE to push water out of the levee area,” said 2nd Lt. Robert Parker, officer in charge of the project with the 843rd Engineer Company, 205th En. Bn. “We are pushing about a quarter inch of water out every hour with the hydraulic pumps.”

Parker, of Zachary, said as long as the weather cooperates it will take about 17 days to push the water down to the level they need to work on the levee. Once the area is dry, the engineers will compact the bowl of the levee and bring it to grade using material from a retention pond.

“To me on a project this size the most important thing to me is the experience I gain,” said Spc. Nicholas Lathan, a Baton Rouge native with the 922nd Engineer Company. “You don’t always get the chance to work with some of these older sergeants, but here you get to learn and the sergeants are willing to teach you. They teach us younger guys not only how to run the equipment, but how to understand the job and what the complete project will be.”

Angola was forced to breach the levee in 2008 when high water threatened the ferry operations at the prison. The levee is also used to take some of the strain off the main levee if the Mississippi River floods. “These missions allow our Soldiers and leaders to maintain proficiency in their job fields and improve their project management skills,” said Maj. Kevin Middleton, the administrative officer for the 205th Engineer Battalion. “These projects allow the Guard to maintain credibility and strong relationships with surrounding communities and local agencies.”

The engineers expect the project to take four to five months to complete.